Home » Articles » The dangers of ‘resilience’

The dangers of ‘resilience’ 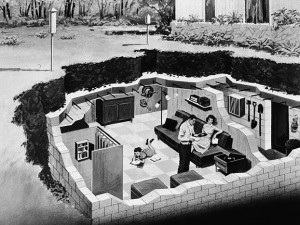 Maja Schwoerer reports on the Future Cities Salon debate at the Building Centre in London.

The recent debate, Crisis is the New Normal: what is a Resilient City?, brought together an interesting panel of architects, journalists and sustainability experts. ‘Resilience’ is a buzzword sweeping the entire industry and seemingly provides solutions for everything – be it civil war in Damascus, floods in the English countryside or narcotics-related crime in Bogota. The idea has been pushed as a transnational project by Judith Rodin and the Rockefeller Foundation.

As a concept that has been largely uncontested, but as this debate proved, we have to address some important concerns.

The chair, design and innovation consultant Martyn Perks, first of all asked what ‘resilience’ even means to us. Does the idea of inevitable threats bury us in a sense of anxiety, limiting our freedom to create and imagine our future with confidence? Or does it enable us to build better and change in exciting ways? For Irena Baumann, professor of sustainable urbanism at Sheffield University, resilience means adaptability and amalgamation. She saw tremendous potential for resilience-thinking, and new ways to live within the constraints we now face. Crisis has not become the norm, she argued, crisis is a dynamic. We are living in an era of change, and the old ways don’t suffice: ‘We are wiping ourselves out completely, we are heading straight for disaster.’

Robin Nicholson, senior partner at Cullinan Studio, agreed that we need to accept nature’s constraints and recognise that our vulnerability stems from our lack of restraint, our greed, our limitless ambition. In contrast, Austin Williams, associate professor of architecture at XJTLU university, argued that resilience creates a frame of mind that is artificial. Constraints limit our creativity in architecture and design; instead, we need to discuss more options than just one narrow road of ‘future-proofing’ and ‘disaster-proofing’. Resilience implies a loss of control, built on the idea that chaos is inevitable and needs to be prepared for. But, Williams asked, aren’t we more in control than ever? Are those constraints real? He argued that the whole notion of resilience is illegitimate as an organising idea and suggested that its impact will be negative.

Because of its vagueness, ‘resilience is a bottomless pit, it is anything you want it to be’, Williams said. And herein lies a big danger: the Rockefeller Foundation speaks of mitigating anything from terror attacks to unemployment to ‘civil unrest’. What does that mean? Williams asked if the aim of resilience projects is to create a ‘Chinese false harmony’, creating bland cities in which even social engagement is regulated.

Across the panel, there was deep mistrust of the anti-democratic nature of the Rockefeller Foundation. Robin Nicholson argued that the chief resilience officers might simply generate more bureaucracy and Irena Baumann criticised their top-down agenda-setting. From the audience came the appeal to define risk and resilience for ourselves now, or it will be hijacked by others. In that sense, Nicholson and Baumann argued that resilience should be led by communities. However, argued Austin Williams, isn’t the urban and the local irreconcilable? For him, the great potential and power of cities comes from being more than the sum of its communities.

In a bigger sense, resilience defines our relationship with the future. We are expecting bad things, and our future does not seem to be filled with unlimited opportunity. Instead of preparing for the worst, we should be mitigating present problems, such as the shortage of affordable housing. By doing so, we would automatically be creating better conditions for the future, and changing our mind-set itself.

Christine Murray, editor of the Architectural Review, left us with an important message: we need more criticism of resilience, and we need more courage. There is a need to keep discussing and defining our personal relationship with our surroundings, our future and our imagination, as ambitiously as possible.