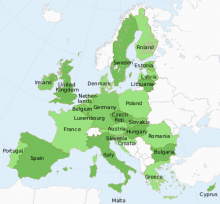 Brexit is is not a triumphalist moment but one for constructing a better future, one in which we have the autonomy to make decisions outside the technocratic framework of the EU. For those who are fearful, it is understandable – and there is inevitably going to be business difficulties in the months ahead. But let’s not forget that things were far from rosy before the referendum. For those who have experienced home-grown recessions or are still suffering the weak construction market that has existed in much of the UK for years, this reinvigoration of democratic political dialogue should be something that can overcome paralysis, but only if we see it as an opportunity rather than as a source of fear.

This was not a vote against Europe (the people, the continent), but a vote against the technocratic institution of the EU. Foreign workers should not be worried… and more importantly, we should not engender paranoia in the way that we talk about this. At the moment, there is a poisonous tone and we all need to calm things down a little. When people start suggesting that democracy is over-rated – by those who don’t like the result – then you know that things are getting out of hand.

A little bit more rational, political, confident discussion is needed, rather than the over-emotional, defensive, bile that seems to flow freely on Twitter by people who seem to think that it is OK to use the most contemptuous of language to describe those who exercised their democratic will. We need fewer claims that this vote represents “parochial, narrow-minded, bigoted little Britons” because then we learn nothing. Actually, it seems that such metropolitan elite contempt for half the population was what enlivened many marginalised voters to give them a kicking. The deal is done, let’s accept it and make it a positive experience. John McRae of Orms is right in saying that, now, the challenge is to explore what our new found freedom could be.

We intend to host some discussions around this issue, as well as produce a document for a new narrative environment that could (and should) be the outcome of this referendum result. A chance to rethink the possibilities arising.

Your comments are welcome.

Listen to the PODCAST here: