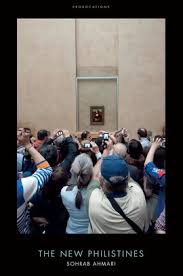 Ahmari packs his polemic with a pistol in his pocket, gunning for what he perceives as the art world’s ‘obsession with identity politics’ which he argues has come to dominate and disfigure our culture. Increasingly doctrinaire and instrumental, art has become subjugated to ideology, and as such, fails to connect and move. Beauty and mystery are out. Ugliness is in.

‘Visit any gallery, museum, or theatre and the chances are the art on offer will be principally concerned with race, gender, sexuality, power and privilege.’ Identitarian theory has provided a new set of rules to signal political correctness, thus narrowing the space for self-expression. Alienated from higher values of beauty and truth, ‘The degree of politicisation means that art no longer serves its historical function as a mirror and repository of the human spirit.’ While recognising identity lies at the heart of culture, identity politics has foreclosed on open questions in favour of ‘a set of all-purpose formulas about race, gender, class and sexuality, on the one hand, and power and privilege on the other’

He takes us on a whistle-stop journey through theatre, dance, visual arts and film to show his evidence of these ‘New Philistines’. A declaration of his passion for Shakespeare in the first chapter, Intruders in the Temple, outlines the Globe’s origins and mission, before leading into a takedown of Emma Rice’s tenure as artistic director at the Globe – a ‘card carrying identitarian’. Her debut Globe production, A Midsummer Night’s Dream reworks the play in a contemporary setting, swapping the gender and sexuality of roles, introducing dance routines and drawing on a ‘vaguely Indian’ influence. He is horrified at the resulting ‘garish cultural and period mishmash’ that brings identity politics to the forefront which, essentially for him, undermines the timeless and universal qualities of Shakespeare and his play. Rice’s stint at the Globe has indeed divided critics and audiences, but Rice has also inspired vociferous defence for her experimentation. Theatre Critic Lyn Gardner’s review of Midsummer Night’s Dream was glowing, and asserted that ‘art is about reinvention, not replication.’ Ahmari seems to overlook that it is precisely because Shakespeare’s themes and characters have such universality, that his work allows such room for experimentation and adaption.

American art magazine, Artforum comes under fire next as an example of the avant-garde art world’s embrace of radical feminism, queer theory, anti-capitalism and racial grievance. Ahmari describes some of the key criteria identitarians apply to art; intersectionality, visibility, individualism and legibility. He describes contradictions that expose many illiberal ideas within identity politics and which, far from furthering universal aspiration to equality, detract from them through increasing adherence to competing group identities. Any proposition of individualism or radicalism within art is eroded because ‘the politics of difference appears to undermine individual autonomy, reduce liberty, and enforce conformity’. Embarking on a self-guided tour of London’s art scene, Ahmari visits various galleries, a film festival, dance events and talks, to reinforce his narrative of the pervasiveness of identity politics in art. He places blame firmly in the cultural relativism espoused by Foucault’s theory where judgements about beauty are seen as impositions of power: Who gets to express what?

There is a good deal that resonates in Ahmari’s diatribe; from a trend towards overly prescriptive and instrumental art, to his description of faux complexity, inaccessibility and unintelligibility of some work. He draws attention importantly to the inherent contradictions often obscured within identity politics, and an illiberalism that can commonly result in censorious values and ill-founded accusations of cultural appropriation. However, his tendency to shorthand ideas – and his own ideals – mean many assumptions need not only unpicking, but are left unsubstantiated. He holds too tightly his own unexamined conclusions, even excusing himself for skirting over long history of philosophical thinking and aesthetics: ‘This age-old debate needn’t detain us… simply because contemporary identitarian art rejects the very possibility of the objective universally accessible beauty and truth.’

His comparison of the utilitarian propagandist, socialist realist art of Stalinist Russia, typifies some of the problems inherent in this lynchpin of Ahmari’s argument. The recent Royal Academy exhibition, Revolution: Russian Art 1917-1932, demonstrates its legacy, lasting influence and interest, beyond original intentionality. Moreover, in spite of state control and constraints, art of that period, proved to be a Trojan horse encompassing moments of great beauty, universal qualities and ambitions, that transcended its time and context, while also reflecting it.

Exploring particularities of identity can also offer universal resonance because we have complex human empathy with others. Consider the work of artists such as Frida Kahlo and Cindy Sherman, both who explored female identity & archetypes, though never confined themselves to speaking to this alone. Contemporary artists such as Yinka Shonibare & Chris Offili make work of immense beauty exploring identity. Moonlight, a poignant coming of age film which tells a story of how a young black man in gang-rifted poor suburbs of Miami struggles to come to terms with his sexuality, and has proved one of the most beautiful and moving films of recent years.

Art that cudgels us over the head with zealous and instrumental intentionality, can be plain dull, leaving little or no room for imagination or mystery. But art evidently stirs not just beauty, wonderment, and thoughtful contemplation because artists have long grappled with social issues of inequality, injustice and power – provoking passion, fury, and indignation – and showing the uglier side of life too. Identity and experience is an endlessly rich seam through which artists have found creative expression. It’s never clear in Ahmari’s arguments where exploring identity tips into the prescriptive identity political art he so detests. He seemingly ends up injecting his own art moralism, and comes across as a finger-wagging, cultural curmudgeon. Sadly, he doesn’t seem to place enough trust in artists, and audiences to make judgements either.

Ultimately, it’s a provocative book, and worth a read for that. It mirrors some of the difficult challenges and heated discussion around identity politics and instrumentalism in art, and –perhaps inadvertently – raises many other questions. How can experience of racial, sexual and gender inequality be discussed, expressed, and fought against without slipping into churlish condemnation? How can we avoid losing sight of the achievements made for equality while recognising the challenges that exist for people who still feel marginalised or discriminated against? How can we value both the particular, and the universal, without sacrificing one to the other? Beauty and truth are not the only criteria for what makes good art, and art and music have often been at the forefront of changing social attitudes. Artists can inspire, provoke and connect us, in a myriad of ways, but ultimately artists must be free to create, experiment, and challenge.

The New Philistines is available from Amazon UK