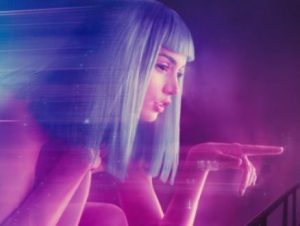 We are now only two years from the dateline of the original Blade Runner. Ray Bradbury’s melancholic future of Martian settlement and abandonment, The Martian Chronicles, has since long passed, and along with it of course, 1984.

Today we should be living in Jules Verne’s Paris in the 21st century. And now Dennis Villeneuve’s Blade Runner 2049 decides consciously and unashamedly to continue in the same lost future imagined thirty years previously. A glowing hoarding for the defunct pan-American airlines, visible also in Ridley Scott’s original film, makes this clear. It’s certainly reassuring to know that PanAm made it unscathed through the thirty years separating the two films, despite all the terrible things that happened in there, which we will get to presently.

It’s a truism that our visions of the future reflect the age that we are living in. Blade runner 2049 has at its heart Philip K. Dick’s lifelong obsession with memory, identity and the nature of reality, understandable giving the shape-changing psychoactive-substance-abusing times he wrote it in. Layered onto this, then, there is Ridley Scott’s neo-noir down these mean streets a man must go, to which he added, who is maybe an android? At one point, one of the characters from the previous film resurfaces, and we remember that yes, the 1980s, that was big hair too.

Villeneuve has stated that he wanted to stay true to the original, and in Blade Runner 2049 he has gloriously succeeded. The film is a wondrous widescreen evocation of a ruined post-catastrophe future, beautifully filmed by Roger Deakins, who knows how to do retro-futurism, having worked on the film version of 1984. Ryan Gosling is as cooly implacable as you’d expect him to be, and Harrison Ford’s Deckard is as we remember him. His character seems to have spent most of the the three decades between the two films going through the world’s largest drinks cabinet. Happily, the intervening catastrophes have destroyed most digital media, which means there is still some gumshoe work to be done — in flying cars mostly, of course, because this is Blade Runner. That’s what drives the film along, and it’s for the most part compelling and fun to watch.

But within this retro-futuristic straightjacket of “being true” there isn’t much space left over to imprint our current worries. Pervasive surveillance and the effortless execution of miscreants by remote-controlled pilotless drones (whilst the operator gets a manicure) makes a showing, and as a counterbalance we are allowed a marginally hopeful scene involving bees. The Pacific Ocean is kept at bay by an enormous seawall, and weather conditions seem to change faster than you could switch channels on TV. Like in William Gibson’s The Peripheral, the world-melting disaster presented here drives humanity to desperately invent advanced technologies to survive, but the end result is to merely to exaggerate existing power structures. Big corporations operate well beyond the bounds of law enforcement, and we see one of the chief baddies sauntering around LAPD headquarters without so much as ringing the doorbell.

So, the film succeeds entirely as a sequel to the original, which has cast such a long shadow on cinematic history. By continuing down the fork in the road of it’s predecessor, it is an even more fully realized version of the same future. Yes, this is a retro-futurist film, unlikely to come to be, which is partly reassuring, because the future that it depicts is not a place you’d like find yourself living in. Cinema should not necessarily inspire us with a shining future of gleaming spaceships, brushed metal and inter-species kissing. But where are the utopias today?

This article first appeared on the pages of Dr. H. J. McCracken’s blog.