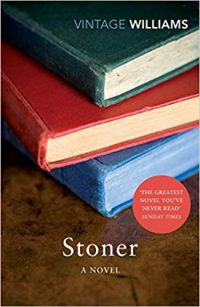 I read Stoner when I had just started teaching Italian language and literature few years ago. I read it again in the past few weeks because a friend reminded me of its beauty. John Williams actually said that Stoner was “substantially good”. And this too comes to mind when you read it. It is a good book: it has substance, gravity and it stays with you afterwards. What Stoner reminds me of is the enchantment of the book and its suggestion that literature itself might be the best way of understanding life.

Stoner was a teacher of English literature at an American University at the beginning of the twentieth century. He became one after realizing that there was something in the sonnets he was studying that would have explained not just the mystery of literature but of life itself. Stoner became a teacher because he wanted to be “simply a man to whom his book is true, to whom is given a dignity of art that has little to do with his foolishness or weakness or inadequacy as a man”. Williams describes Stoner’s call to literature and his profession in the way we understand the value of reading, studying and ultimately teaching: “The love of literature, of language, of the mystery of the mind and heart showing themselves in the minute, strange, and unexpected combination of letters and words, in the blackest and coldest print…”

A lot of people who have read the novel think that Stoner had a sad and bad life but I agree with Williams who in one of his interviews commented that Stoner is a real hero. He wrote: “I think he had a very good life. He had a better life than most people do, certainly. He was doing what he wanted to do, he had some feeling for what he was doing, he had some sense of the importance of the job he was doing … The important thing in the novel to me is Stoner’s sense of a job … a job in the good and honorable sense of the word. His job gave him a particular kind of identity and made him what he was.” Despite the many defeats in his personal life, Stoner in fact is the only real man of courage of the novel, a man who “concentrated all the energies of which he was capable upon the moment of his work and hoped he was at last defined by what he did.”

In his great review Stoner: the must-read novel of 2013, Julian Barnes describes in few words but very eloquently what happened when one started reading Stoner: “The first page led to the second, and then what happened was that joyful internal word-of-mouth that sends a reader hurrying from one page to the next.” I can say that this happened to me again the second time I read it. A joy.