Home » architecture-and-urbanism » Getting one over Parr

Getting one over Parr 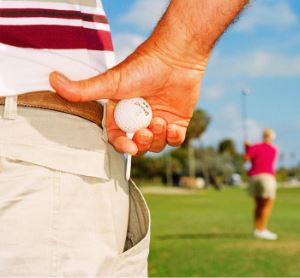 As a photographer, I value the freedom of expression that the medium affords to comment on subjects without recourse to words. Often the ambiguity of an image is its essence – the viewer’s subjective interpretation elevates it to a level of craft, if not art. Without a viewer’s response it remains just an image. Any thinking photographer knows this and will edit and manipulate an image to make a statement or provoke a response. Whether it’s an advertising shoot to make a product look its best or a war photographer capturing a moment, all who dabble in the photographic art have some idea of what they want to say through their images.

It is in this context, that the story of Martin Parr (possibly Britain’s best-known living documentary photographer, although Don McCullin might dispute that title), a self-proclaimed public figure and patron of contemporary British photography, is worth telling.

Best known for his highly saturated social documentary style, since 1974, Parr has exhibited in nearly 400 venues across the world and has become the éminence grise of British photography. In 2019, post-Brexit, he exhibited images featuring areas where the leave vote had predominated. Entitled Only Human, it ran from 3 March – 27 May 2019 at the National Portrait Gallery in London, attracting large numbers responding to the images and bringing their subjective views with them. Parr knows his audience and was happy to oblige them with his distinctive take.

So far, so good then. Amongst his many activities, Parr often organises retrospective exhibitions of other influential photographers and re-publications of editions of photographic books that have gone out-of-print. This is done through the aegis of his charity, the Martin Parr Foundation. In 2017, he was invited to write an introduction for a new edition of a collection of photographs by an Italian first-time photographer called Gian Butturini, simply titled London. Originally self-published in 1969, this photo-book has acquired cult status for its revealing view of a city by an outsider.

During the run of the Only Human exhibition at the NPG, a group of three protestors led by student Mercedes Baptiste Halliday, picketed the exhibition over Parr’s involvement with the new edition of Butturini’s London. Allegedly, she had been given a copy of the book for her 18th birthday by her father and had taken offence at one of the spreads in the book – not one individual image, but the fact that one image was juxtaposed with another facing it: I leave the reader to interpret the image for themselves – there will be many different readings of it, but it is important to note that Parr was merely writing the introduction for a new edition of the original and did not alter the book’s pagination. 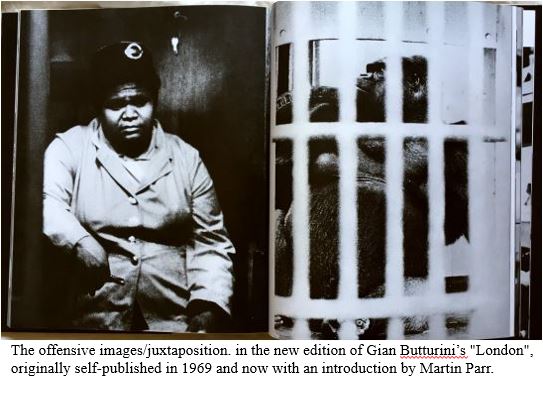 Poor Martin Parr – just as he was expecting to bask in the reflected glory (and why not?) of reviving a classic, he suddenly finds he is the target of unwelcome attention from a concerted campaign to out him for “editing an overtly racist book, platforming child abuse, along with the abuse of sex workers”.

As a result, he has decided to apologise for the error of his ways, both publicly and in a letter to Mercedes Halliday

Mercedes’ father, Paul Halliday is an artist, urbanist and cultural archaeologist based at Goldsmiths where he is the course leader of the MA Photography course and has been quite outspoken in his dislike of Martin Parr and what he describes as this “overtly racist book”. Why would a father so sensitive to racism give his daughter a birthday present of what he calls ‘racist shit’? We may never know, but it has kicked off its own particular shitstorm.

Parr has also resigned as Director of the forthcoming Bristol Photo Festival following the concerted Twitter campaign organised by Less Than Human Debate . The Guardian reported: “In light of recent events, UWE (University of the West of England) Bristol MA photography students decided to cancel their planned end-of-year exhibition which was due to start at the Martin Parr Foundation (MPF) last week. The university is fully committed to diversity, equality and inclusion and supports the students’ decision.”

Defeatist as Parr’s apology and resignation appears to be, it’s the language and manner of them that concerns me most: In his public apology he says “the MPF is a charity that was set up to shine a light on photography, to give emerging, overlooked and under-represented photographers a platform, and to champion the work of artists from all backgrounds.” The destruction of photographic books, as he requests of the publisher, is hardly consistent with this pledge. If Parr really believes that “photography should be a place for everyone”, was the late Gian Butturini not one of those people?

What kind of message does this send aspiring photographers (or indeed anybody hoping to work in the creative arts)? I can imagine the fear of committing some micro-aggression by even thinking of taking a photograph will paralyse and prevent any would-be photographer from ever pressing the shutter release, thus depriving history of a photographic account of their life and times.

Martin Parr has been selectively and unfairly targeted as a ‘public figure’ – a privileged white man of reputation and influence in the world of photography.

Unfortunately, his response only serves to encourage subjective post-rationalisation which ultimately crushes the creative endeavour and freedom of expression that he has benefitted from throughout his career. Through his actions, doubtless taken for reasons of self-preservation, Parr has inadvertently further fuelled the divisions that he purports to eradicate through legitimising what is effectively censorship.

Martin Parr may not be your very British cup-of-tea. But, whatever your opinion of him, he surely does not deserve to be the subject of such abuse which has led to his abject apology and resignation from a project in which he has invested much time and effort.

This episode is indicative of a trend whereby small pressure groups feel that they have the right and duty to destroy reputations, often built over many years of effort and endeavour, and to eliminate anything that they deem offensive. Such ‘activists’ also often seek retribution in the form of craven apologies or resignations. Fearful of the power of such campaigns, both individuals and institutions queue up to recant and plea for forgiveness for their misdemeanours.

As the wheel turns, it will be fascinating to see how history treats the disrespect of those who have become successful in their fields.

Howard Sherwood is a graphic designer and photographer. Visit: https://www.photage.co