Home » Articles » Flutkatastrophe: A Report on the German Floods

Flutkatastrophe: A Report on the German Floods 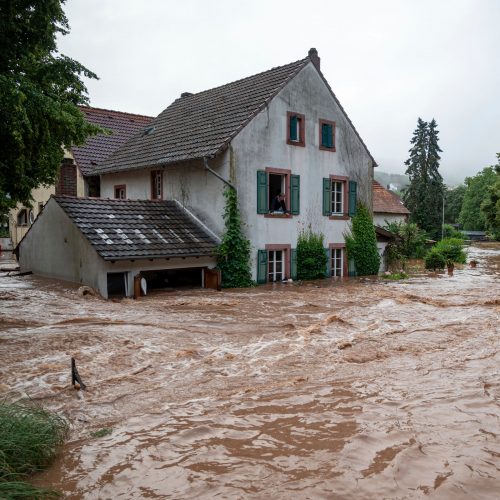 In July this year a deadly flood hit areas in western Europe, killing over 200 people, 184 of them in Germany alone. Following unusually heavy rainfall (over 200 litres/m2 within 24-hours) several rivers in the Rhenish slate mountain area flooded.

One of the worst affected areas was the Ahr valley. The Ahr, normally a pleasant little stream – leading into the Rhine- turned into a monster river within only a few hours. No-one living in the area had ever experienced anything similar.

As is so often the case, this disaster can – and has been – interpreted in different ways. Some saw it as a terrible consequence of global warming. The floods, they argued, were a  harbinger of what we can expect if we don’t get rising temperatures under control. Others have portrayed the disaster as symptomatic of a climate debate and policy gone wrong. This latter interpretation has become more prevalent with time.

Only hours after the disaster, new information emerged that would lead more and more people to question the initial narrative of global warming as the only explanation for this disaster. First, some meteorologists pointed out that heavy rainfall was not a new phenomenon in central Europe. Then, climate historians and geologists presented studies indicating that the Ahr area had been hit by extreme floods before, and that our historic memory was too short: there had been strong floods in 1910, and a flood of comparable intensity in July 1804.

But what really served as a turning point in the debate was when information came through that the early warning system in the region had completely failed. A shocked public had to learn that most of the deaths could well have been prevented. It was revealed that even as the floods were already building up in the higher parts of the mountains, in the evening of July 14th, people at the lower end of the valley were still oblivious to the danger. It was here that the great majority of the deaths (140 in total) incurred. There are many tragic stories of people – some old, some disabled – who were surprised by the water flooding into their homes as they slept, with no time to even make it into the upper floors of their houses. Weather warnings had been issued days in advance. Why were they not passed on? Many other problems have come to the fore: alarm sirens had been dismantled, dam enforcements postponed (see Erfstadt, Wassenburg, Steinbachtalsperre), and retention basins not yet built. Many of these deficits have now, thankfully, moved more into the forefront of consideration for action. 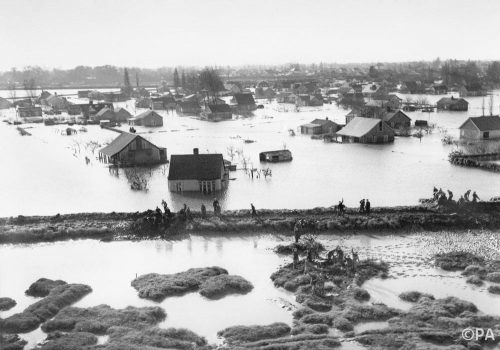 It is a reminder of the terrible floods of 1953 in the UK and coastal Europe, when freak food tides swept ashore, drowning 307 people in Scotland and England and over 1850 in the Netherlands. This was a time where radio stations didn’t broadcast at night, the emergency services infrastructure was inadequate, flood defences were weak and mobile phones didn’t exist. Then, there was an immediate clamour for the construction of expansive sea and flood defence systems.

In today’s circumstances, there has been a clamour for a criminal investigation. Indeed, several members of the local authorities have already been charged with negligent homicide. But many people have asked themselves this: How could so much have gone wrong in a modern, developed country like Germany? Even Bangladesh, a much poorer country, has – through the development of a reliable early warning system- been able to reduce significantly deaths through flooding (although, even now, far too many die due to lack of development and physical infrastructure: with 2020 reports showing that 212 Bangladeshis drowned, [27 died of waterborne snakebites] and 78,000 people were infected with waterborne diseases). It seems that both Germany and Bangladesh need meaningful development.

One explanation for the situation in Germany is that it has been setting the wrong political priorities. German politicians have been presenting themselves as especially climate conscious. The country has been spending grotesque sums of money – over Є30bn per year – on its shift from conventional to alternative energy. This eco-spending spree has been at the cost of other important infrastructure measures, and the question of how the country can adapt to a possible climate change has been dangerously neglected.

Even as far as the government’s own carbon reduction priorities are concerned, much of what is being done is contradictory – such as the phasing out nuclear (Germany’s last six atomic power stations are to be shut down next year). Politicians have also been endlessly appealing to ordinary people to change their behaviour (it has just banned plastic cutlery, straws, food containers, balloon holders, and cotton buds). Yet, where it matters most, it’s the state that has shown itself unable to do what it should be doing: improving and protecting citizen’s lives.

It’s not as if we Germans haven’t realised that something is going badly wrong. One indication is that the Green Party did much worse in the September election than many had expected. Despite the floods, and wall-to-wall reporting on global warming, the Greens won less than 15% of the votes. Yet, as the new coalition negotiations show, Germans who want a different energy or climate policy will have to push very hard. For the moment, wherever voters turn, they will get more climate policy of the same kind. An opening up of the debate about what should be an appropriate response to the everyday matter of rainfall is sorely needed.