Masterplanning the Future: Modernism – East, west and across the world 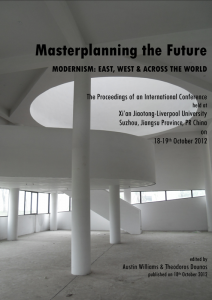 These proceedings document the work of a wide range of researchers, academics and experts from across the world, each presenting at the Masterplanning the Future international conference held in China on October 18th and 19th 2012.

These various essays from 15 different universities across the world, outline a variety of intellectual explorations relating to historical and contemporary situations, discussions and case studies. As a body of work, and as a contribution to open inquiry, this is less an examination of how direct ‘conclusions’ or ‘lessons’ can be learned from different historical periods and social circumstances, but hopefully helpfully, the exchange of ideas and experiences facilitated by the Masterplanning the Future conference may help to stimulate a better understanding of architecture, contemporary and traditional urbanism; fostering critical awareness and challenging perceptions. Within a rapidly urbanizing world, the contributors look variously at how advocacy, criticism or rejection of modern design – as well as Modernist idealism – can go some way to helping us understand the global urban condition.

Back To (Civic) Life, Back To Morality

An Architectural Fable For Our Modern Times 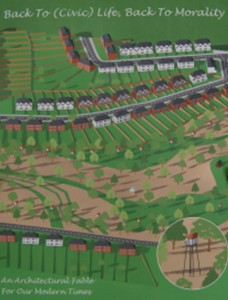 Has Britain lost its moral compass?

Here, in a fit of Victorian-style philanthropy, some successful business people pledge to use their wealth for good, and provide funds for a series of ‘moral rehabilitation’ centres around the country. Sited on (morally) high grounds in secluded city locations, the centres are open to anyone lacking in moral values and showing signs of civic disengagement.

Instead of an institutional complex, the design references allegorical gardens of the past and places a series of follies within a park, laid out to emulate the points of a metaphorical moral compass. As well as housing the various therapy sessions, the follies perform the function of symbolic and suggestive representations of the characters portrayed in medieval morality plays whilst also hinting at traditional civic and domestic building in both their form and expression. 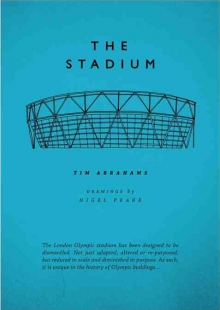 In this eloquently-argued essay that takes apart the Stadium for London 2012 piece by piece, Tim Abrahams provides fascinating insights into the process by which this strange structure was designed and built. Drawings by the illustrator and architect Nigel Peake.

Buy this book from Machine Books

The Anxious City: British Urbanism in the late 20th Century: Ideology and the Public Realm

In the Western world, cities have arguably never been more anxious: practical anxieties about personal safety and metaphysical anxieties about the uncertain place of the city in culture are the small change of journalism and political debate. Cities have long been regarded as problems, in need of drastic solutions. In this context, the contemporary revival of city centres is remarkable. But in a culture that largely fears the urban, how can the contemporary city be imagined? How is it supposed to be used or inhabited? What does it mean? Taking England since WWII as its principal focus, this provocative and original book considers the Western city at a critical moment in its history.

Buy this book from Amazon UK