Home » culture-and-society » Of Pens and Tents: The Jaipur Literature Festival ’13

Of Pens and Tents: The Jaipur Literature Festival ’13

“What really knocks me out is a book that, when you’re all done reading it, you wish the author that wrote it was a terrific friend of yours and you could call him up on the phone whenever you felt like it. That doesn’t happen much, though.” – J.D. Salinger (Catcher in the Rye)

Maybe not being terrific friends, and exchanging phone numbers, but from a personal viewpoint, the most significant impact of the Jaipur Literature Festival was the extreme proximity and access it provided readers to the participating authors, and that is a great feeling. 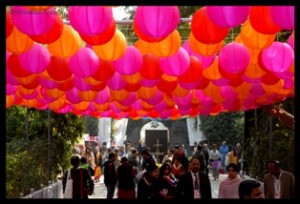 ‘The Greatest Literary Show on Earth’ as the organizers refer to it, was held this year at the end of January, at the premises of The Diggi Palace Hotel, in Jaipur, and saw several hundred thousand visitors within a span of five days, with yours truly being one of them. Having heard a great deal about the festivities from colleagues, who visited earlier editions, I decided to make the trip this year, and was rewarded with a highly eventful week.

The grounds had been divided into five halls, each holding simultaneous sessions with tremendous seating capacity, my favourite being ‘The Google Mughal Tent’, not least because of the amusing ring to its name.

As you begin an account of the sessions that I attended, let it be put on record that with five sessions being held simultaneously every time, one was barely able to cover a fifth of the whole. I chose to attend those relating my personal inclinations, the popularity of the speakers or topic, or sometimes, just on a whim. 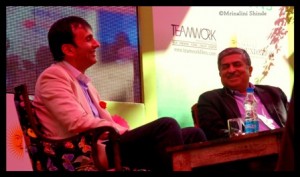 The first session I attended, (predictably, with my case of clinical Shakespearephilia) was ‘The Global Shakespeare’ by a highly accomplished panel, with their expertise on The Bard, mainly dealing with the universal appeal and relevance of Shakespeare’s plays. I was especially impressed by Elif Batuman’s account of rural women’s theatre in Turkey which popularly interpreted Hamlet in their context, with respect to the question of life in the face of futility. Another interesting view was by Chandrahaus Choudhary about how the compulsory appreciation of Shakespeare in the modern schooling system made people resent the playwright; one must discover him on their own terms. However, my pick was Sir Christopher Ricks’ observation that in a world where poetry is considered the highest form of literature, the greatness of Shakespeare’s prose was unmatched. When a member of the audience asked him, “Sir, is the final word on who wrote Shakespeare out?” Ricks shot back, “Is the final word out, whether the earth is flat?”

Pico Iyer’s interview with His Holiness, The Dalai Lama, saw the largest audience in attendance. The Dalai Lama, being his genial and affable self, kept clear of any controversial discussion; he spoke about the necessity of morals overruling that of religion, and that nihilism must be respected. He noted how Buddhism was seen as a religion based on monks and meditation and argued that it must instead be studied like an academic discipline, since the Buddha too expected his followers not to trust his word but to investigate.

Another interesting session was Tarun Tejpal’s (Founder of Tehelka magazine) discussion with Shashi Tharoor, former diplomat, and current Minister in the Government of India. I am fond of Mr. Tharoor’s writing, and the discussion revolved around his views on India’s foreign policy and status in the global economy as espoused in his new book ‘Pax Indica: India and the World of the 21st Century’.

One of my favourite sessions from the fest was Faramerz Dabhoiwala’s introduction to his book ‘The Origins of Sex’. Laced with immense wit and humour, he traced the evolution of sexual freedom in the west, the interaction with a prudish Church, when fornication was a sin, giving the example of the execution of Susan Bounty. He also explained how urbanisation had been the key to sexual freedom, for instance- London, where the development of an urban way of living, created new ideas of liaison and sex, making the intellectual paradigm shift from faith to reason.

I also enjoyed the session on ‘Jorasanko’ the semi-fictional work by Aruna Chakravarti tracing the lives of the women of the illustrious Tagore family of Kolkata, and another discussion on Sharia law, which examined the idea of ‘God as a Legislator’

The most important idea at the Jaipur Literature Festival is undoubtedly freedom of speech and expression, and not only because of the numerous controversies regarding the same that the Festival has been associated with. (Read: Salman Rushdie and the Jaipur Literature Festival). While dealing with freedom of expression with regard to ‘Sex and Sensibility’ in Hindi films, veteran actor Shabana Azmi, and lyricist Prasoon Joshi discussed how a filmmaker’s intent is relevant while determining the sort of influence a film has on audiences, while noting how recently there has been a shift from entertaining to titillating visuals.

The session on ‘Freedom of Speech and Expression’, moderated by John Kampfner, and part of the International Edinburgh Writers’ Festival, saw a panel comprising Shoma Chowdhury, Orlando Figes, Basharat Peer, and John Burnside. While Ms. Choudhury asserted the jeopardy that freedom of speech was facing in India, and how the maintenance of law and order was being used as a smokescreen for rights violations, she observed how it had become commonplace for people nowadays to exercise their ‘right to take offence’, which according to her, should be countered with the right to hurt sentiments. Mr. Peer threw light upon how colonial anti-sedition laws were being used to subvert democracy, and the freedom of the press; Mr. Burnside brought to the fore, the involvement of the private sector in silencing questioners, against ‘greenwashing’ for example. 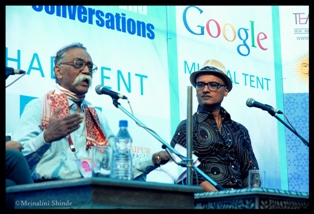 Inter alia, I attended sessions on Islam and Politics, the marginalisation of Kashmir’s history in the liberal discourse, and a session on the literary tradition of rebellion comprising veteran Marathi author Bhalchandra Nemade, and 2012 Man-Booker nominee Jeet Thayil. And yes, the nominees for the Man Booker 2013 were announced at the fest. I also attended the concert organised by MTV Coke Studios as a part of the festival, and enjoyed myself thoroughly while singing along with the artists.

The fest, was an experience. It was evident that the little heritage premises of the Diggi Hotel is physically incapable of coping with the swelling popularity of the fest, its resources strained beyond its capacity, which irked me several times. There is also the question of whether the fest itself is popular, or the idea of the fest is what garners these footfalls. Many people think of the Jaipur Literature Festival as a glamorous, must-do visit on the social calendar, spot celebrities and generally have a good time, with doses of literature and culture thrown in. The front lawns were chock-a-bloc with attendees for the interview with former Indian cricket captain Rahul Dravid. When asked whether it was odd for celebrities to be the reason attracting crowds to a literature festival, Dravid replied that maybe celebrity status could be tapped at such events by trying to introduce these large number of fans to literature, indirectly in keeping with the object of the fest. I thought this was a relevant argument against the puritans crying foul over the degeneration of the fest, that maybe a democratic approach was more the need of the hour, as opposed to making it an exclusive and elitist club social gathering. 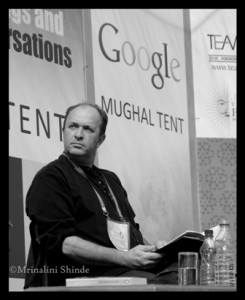 I love books. Looking at them, smelling them, reading them. Sometimes I like to go visit bookstores, just to surround myself with the presence of books. It gives me a sense of calm and belonging. So, it’s a bit expected that I would be happy at an event dedicated, in essence, to the written word, irrespective of specifics. As much as I enjoyed attending and participating in the sessions, the thrill of introducing yourself to your favourite authors (how often does one get to informally talk to William Dalrymple?), talking to them about their books, views, while pretending to be casual, but being star-struck inside, is unmatched, and that to me was the best souvenir to take back from Jaipur. Mr. J. D. Salinger would be delighted.