Population 10 Billion: The Coming Demographic Crisis and How to Survive It by Danny Dorling; Constable, 2013. 448pp 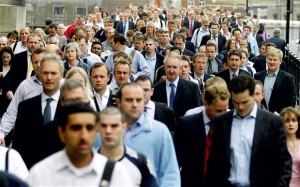 The recent news that the UK is experiencing a mini baby boom was greeted with predictable panic about how Britain’s services would cope. From worries about an ageing population to the familiar refrain (1) about depleted resources, population has long been a lightning rod for broader anxieties about society.

Danny Dorling’s book, Population 10 billion with its determination to be optimistic about the prospect of a greatly increased human presence on the planet seems like a breath of fresh air, but unfortunately it shares many of the same assumptions as its Malthusian detractors.

This does not mean that Dorling’s book does not make some excellent points. His most valuable contribution is to put the population debate into some perspective. He traces the growth of population in the past couple of hundred years. Viewed from the perspective of human history as a whole, our recent growth in numbers has been astonishing. The world population only reached a billion in 1821 but has soared ever since. It took just 100 years more to double to two billion and then less than a further century to get to seven billion. Rapid industrialisation and our resultant capacity to tame hunger and disease have smashed the glass ceilings that restricted the population in a subsistence society. Far from suggesting that our impending advance to the eight, nine, or ten billion mark means that we are doomed (or that we’re multiplying plague bacilli), Dorling presents us with the hopeful message that thus far we’ve been living in the pre-history of humanity. There are going to be more people likely to be educated, urban and able to take control of their lives in the near future than there were people alive a few hundred years ago.

Dorling, then, is no classic Malthusian, but his characterisation of Malthus and his followers is one sided. He portrays Malthus himself as a puritanical preacher worried about the prolific breeding of the poor and hostile to social change. Many who have followed in the Reverend’s footsteps, from Paul Ehrlich, who in the 1960s recommended writing off countries such as India, to Sanjay Ghandi, who enforced a brutal sterilisation programme on India’s masses, can easily characterised being misanthropic and authoritarian. Today, however, very few commentators openly call for forced birth control. Dorling characterises the few today who are openly Malthusian as right-wingers seeking to blame rising population rather than the failure of the financial system for recent economic problems.

Being a left/liberal it may suit Dorling to characterise his opponents in this way. But it ignores the other aspect of Malthusianism: it was not simply defined by its nastiness, but by its scepticism towards economic growth. This scepticism, Dorling endorses in its entirety. He doesn’t think that population will grow to ‘unsustainable’ levels, in fact he thinks that it will tail off at a somewhat lower number than the 10 billion predicted by the United Nations. He does, however, think that our uncontrolled consumption is unsustainable.

His solution to this perceived problem is both interesting and deeply flawed. Dorling perceives that the population will level off and even start to decline by the end of the century. The likely economic consequences of this, he thinks, will be to undermine capitalism. There is possibly something in this; historically increasing population has been associated with economic growth from the influx of immigrants who built America to the current rural to urban migration that is going on in China. Economic growth tends to need an increasing workforce. Even today’s USA with its higher birth rates and higher rates of immigration seems more dynamic compared with Europe’s stagnating economies.

Dorling welcomes any population decline because he thinks that industry will have to produce less because there won’t be new markets to sell to. Ageing populations, he says, will also be less consumerist. He cites figures indicating that in the UK this is already happening, and also argues that with a relatively low birth rate we were buying less even before the economic downturn. The post consumerist society envisaged by Dorling would be more egalitarian too. He cites the wage rise experienced after the Black Death as valuable workers became scarcer and imagines that wages would rise in a more stable population too. He views Japan’s era of stagnation, not as a ‘lost decade’ but as proof that a low growth economy can maintain living standards.

Dorling’s observations about the UK’s decline in consumption might be premature though. Many of the examples he cites such as reduced consumption, more recycling, less house building, seem symptomatic of social and political trends over the last 30 years which encourage caution and discourage ambitious projects. Perhaps they are more a symptom of long term (relative) economic decline than cause. A stronger case can be made for Japan, which seems to have adapted to its problems better than Europe, but Dorling doesn’t spell out what this could mean in the long term as the older economies continue to lose ground to emerging countries. He places his faith in declining birth rates across the developing world that may sooner or later produce a cautious and declining population.

It may be the case that a shrinking population might, at some undetermined future point, have economic knock on effects. But what shapes this book’s belief that this is a good thing?

Dorling contrasts his own brand of ‘Practical Possiblism’ with ‘Rational Optimism’ of authors like Matt Ridley (2), who he accuses of perpetrating the myth that technology will solve our problems. Of course Ridley’s is a worldview born of the absence today of any discussion of political alternatives, a situation which means that technical determinism has become the dominant discourse through which optimistic versions of the future are envisaged. Dorling’s attempts to bring politics back into a discussion of a brighter future is stymied by the fact that his principal objection to the optimists is that they naturalise ‘greed’ and ‘self-destructive behaviour’. Dorling’s politics, such as they are, consist of a moral critique of excess and a call to level down our aspirations. This is directly married to his theory of population.

Population 10 Billion traces the sudden surge in population growth that the world has experienced in the last few hundred years to the ‘geographical shock’ of the discovery of America. In short, this encounter with the New World disrupted the equilibrium of the old. The rapid growth in human numbers, then, is not the result of progress but of a re-calibration of the optimal balance between humanity and the natural world. As Dorling puts it.

“The shock of encounter still isn’t over, but the fact that we are finally recognising recent world history as being largely a reaction         to the geographical shock of the New World’s incorporation, rather than some natural evolution of human selfishness and self-            destructive tendencies, is a further reason to be optimistic. Shocks can be overcome.”

In other words, for Dorling population growth is the result of a disturbance of the equilibrium between humanity and nature and we should be aiming to restore a proper balance, albeit a modern urban one, with the natural world. The view that it is desirable to reconcile modern technology and modern urban life to a natural balance with the planet is a common one in recent environmental thinking from James Lovelock’s support for nuclear power to the fashionable embrace of urban living as a less land-hungry alternative to the agricultural society.

The implicit premise, however, is that human progress is not an open-ended process resulting from people attempting to improve their lot, but something that is disruptive and should be brought under control. Less economic growth would produce less innovation and less unpredictable social development. This is a vision that Malthus would have been in sympathy with. He may have been reactionary by the standards of our own time, but Dorling is just as conservative in his vision of a tamed future.

Population 10 Billion: The Coming Demographic Crisis and How to Survive It by Danny Dorling is available from Amazon