Magdalena Melon | 4 September 2014
“Greening the city”
“If the current way of thinking does not change, sooner or later citizens will actually live in concrete jungles. For a modern architect, the most important mission is to bring back green spaces to the earth.”

“Urbanisation is threatening our green spaces in Ho Chi Minh City” – a quote from Vo Trong Nghia, the Vietnamese architectural subject of this short film – seems to be the main theme of “Greening the city”, the 4th episode of Al Jazeera’s Rebel Architecture series. It was created with the promise of portraying individuals who use architectural design as a form of activism. However, in this particular case I fail to see anything rebellious about the chosen designer’s endeavours.

Nghia, trained in Japan and is now back home in Vietnam’s largest city where he runs a successful practice that strives to provide “green architecture for the 21st century”. This seems to mean primarily integrating greenery into structures.

Nick Ahlmark’s film paints a rather unconvincing picture of Nghia as a radical fighter for vegetation. “Unconvincing” because environmentalism, eco-architecture, sustainable design – call it what you will – is clearly a mainstream global approach. It is hardly radical (although it is clearly a new urban trajectory for the busy streets of this dense, paved city). Funnily enough, his Houses with Trees project has lush greenery on the roofs but concrete and meagre patches of grass on the ground floor.

But it is also “unconvincing” in its presumed importance. The film starts with a striking set of Ho Chi Minh City’s public health statistics – such as the remarkably low percentage of green spaces which are correlated to respiratory problems in the population. However, it does not examine the matter more in depth. Nor does it mean that there is a causal link. It allows Nghia to make assertions about the importance of his work, which seem to be accepted because he is presumed to be on the side of the angels. The idea that green spaces in cities are pleasant, restful, humane places is surely sufficient reason to design them into the urban fabric. But that simple rationale would obviously not justify the label “radical”.

The fact that one of the featured projects was designed for, and constructed in, a remote rural area also doesn’t seem to tie in with the narrative. Mind you, at times, Nghia’s rather contemptuous view of the city, the crowds, the noise, the bustle, the traffic – many of the things that make the city – made me wonder whether he likes urbanism at all. Throughout, we are presented with Nghia’s vision of the modern Vietnamese city… one which seemed not to have too much modernity, consumerism, transportation, etc in it. Offering cheap, improved, pre-cast concrete housing to the rural poor is undoubtedly a good thing. But again, this kind of rebellious appropriate technology discourse – that tends to keep the rural poor in rural poverty, albeit in a nicer, costlier house – has been around for 50 years.

Instead of in-depth analysis of Vietnamese urbanisation model, or its social framework, the film preferred to allow  Nghia to articulate his design stance in abstract. We are only presented with a couple of “typical” working days of the architect with almost no commentary. This kind of approach would be most welcome if Nghia himself provided some more insight – unfortunately, he tends to offer rather debatable one-liners (such as: “population explosion is a big problem in all Asian countries, especially when these countries have a tropical climate.”). 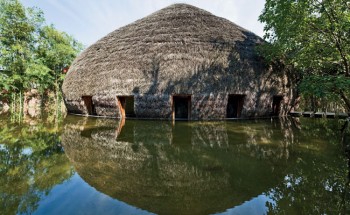 All narrative measures employed by the film seem to be there to convince the viewer that Nghia is a true rebel fighting for the better life for ordinary people. While I certainly don’t deny that the architect is carrying out a lot of quality design (especially some of his bamboo work) that positively affects Vietnamese urban or non-urban context, I was certainly expecting a more nuanced piece exploring an unfamiliar topic or presenting coherently a point of view of a professional practicing in a very different place.

This film is advocacy-journalism. The lack of critical (or nuanced) approach towards the subject and the over-use of a broad brush approach to the story, has been used to convey the “message” that Nghia is a heroic freedom fighter. This is most apparent at the end of the movie. Here Nghia presents his housing masterplan to an unimpressed client: a scene all too familiar to many practicing architects. In this film though, this gets blown up to almost apocalyptic proportions with an emotional focus on misunderstood designer, an uncaring client and a naive system, rather than – maybe – the particularities and failures of the design itself.

The closing credits inform us that actually the client agreed to the proposal after all. But this happy ending masks the fact that the architect will have to endure a lot to realise his interesting design. (A design that wasn’t featured prominently enough for a film about architecture).

That said, even though this film lacked a necessary critical distance and instead chose to present Nghia as a rebel, “Greening the city” is definitely a visually interesting movie. It is well-made and genuinely interesting. It should be viewed for views of Ho Chi Minh City, but also to critically engage in a film that is a little too one-sided for my liking.