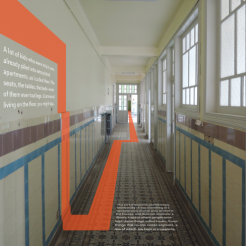 It is not so often we have the chance to attend a debate where every speaker is precise. When we do it is a pleasure, and such was the case last month when some of the contributors featured in the book SQM: The Quantified Home spoke at the Architectural Association (AA) in London.

Produced for the 2014 Biennale Interieur, this project aims to launch a new discussion on the present and the future of the home.  The starting point is that under pressure from multiple forces—financial, environmental, technological, geopolitical – the way we live is rapidly changing – and hence what we used to call home may not even exist anymore.  In the circumstances, the historical relationship of the words home and house have undergone a split; hence the title as a negotiation between the immaterial former – the presence of domesticity, and the countable latter – a financial commodity measured in square metres or sqm.

In his introduction, Joseph Grima argues that the house is now considered more for its financial potential of increasing value and generating revenues than in its traditional role of – literally – housing domesticity. The following three sections, Radical Domesticities, From Dream to Burst, and the Dematerialized Home offer a series of case studies that range from evergreens such as the Frankfurt Kitchen, Superstudio and the Robin Hood Gardens, to the less obvious in the form of the Big Brother house in Rome, huge luxury basements of Knightsbridge, and even Osama bin Laden’s compound, to name but a few.

Such a variety of brilliant case studies are complemented by pages of data, fictions and narratives.  They help build up the general picture from the standpoint of both ordinary and high-culture categories, all at a pace that reminded me some of the best texts of Rem Koolhaas. At the same time the book is capable of the type of pluralism and articulation that are only possible via a chorus of independent voices. Maybe it is for this latter reason that we seem to miss some answers, some patterns, even some overall findings. Nevertheless, this apparent weakness raises the question of what will a home be in the coming years.