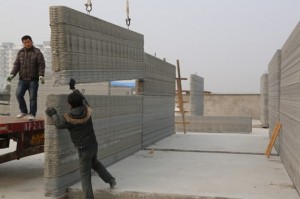 Not to be outdone, Time magazine claimed that “A Chinese company (had) unveiled a five-story apartment building and three-story mansion that were constructed using a 500-foot-long 3D printer”. From Business Insider magazine to the BBC  the story of the gigantic 3-d printer was reported, without question, almost everywhere. 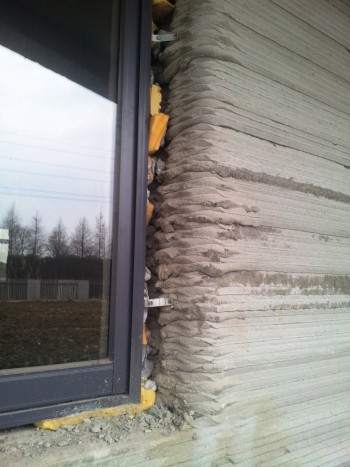 Given that 3-D printing is in its infancy; that printing costs are high and accuracy and finishes are low; that China has a tendency to over-claim and that Western newspapers have become increasingly gullible; I decided to check it out for myself.

The construction company that had taken the world by storm was Shanghai WinSun Decoration Design Engineering Co, situated on the edge of Suzhou Industrial Park near the historic old city of Suzhou in Jiangsu Province. We were taken to the showroom comprising Zaha Hadid-esque tables and chairs in high gloss white plastic that (the company hinted) had been made by 3-d printing but were clearly moulded forms.

The main display was of a variety of huge hollow slabs made out of ribbed, cementitious material. Each giant hollow block was approximately 1m high, 500mm wide and 2m long. Each had been constructed using a robotic arm with a 100 mm wide dispensing nozzle – like a scaled up inkjet printer – that laid down layer upon layer of material, 50 mm at a time. 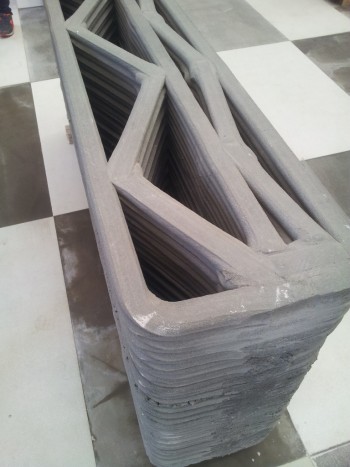 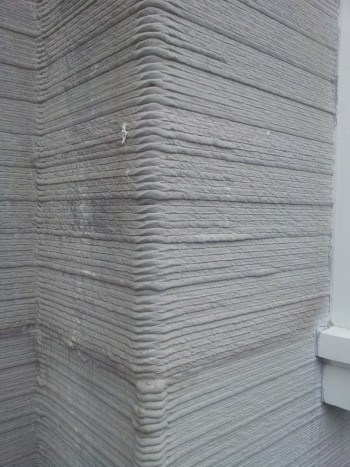 A spokesman for the company suggested that these blocks could be made up to 6 m tall in one go without collapsing or compressing under its own self-weight: a claim which is yet to be substantiated as the company is reticent about showing test results, or revealing the exact make-up of the materials used. While the company is keen to profess it’s green credentials, suggesting that they use up to 15% of recycled construction waste in the glass fibre, steel and cementitious mix, they are less open about explaining what the miracle hardening agents are. 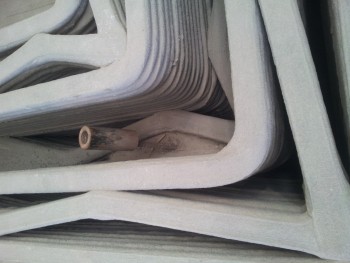 Once again, the company claims that they are able to “print” up to 150m in length. Exciting that all this technology is, and the ambitious programme for expansion and innovation that the company holds, this clearly is an example of over-hyping a reasonably interesting product, but one that also has serious deficiencies and a long way to go before the claims of 3-d printing can be in any way acceptable.

This manufacturing process “prints” a linear form. The robotic arm goes around in a closed loop forming the blocks’ circumference and internal strengthening lattice before repeating the process time and time again to build up a two-dimensional plan form into three dimensions. Conversely, the exciting nature of “3-d printing”, is the ability of a printer to realistically recreate a three-dimensional form, regardless of its intricacy, complexity and lack of symmetry. This production process in China cannot do this. 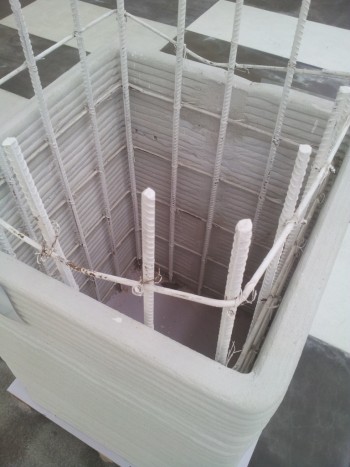 Essentially, this company is producing very large, heavy prefabricated units which can then be taken out of the factory onto the site and assembled. The latticework on the inside of these giant blocks precludes the integration of insulation within the thickness of the block. Furthermore, the claim that this latticework plays meaningfully structural role is dubious inasmuch as the diagonal concrete has only a tenuous bond with the perimeter concrete. If any shrinkage occurred, whatever structural integrity there exists might fail – although this is supposition on my part pending further evidence to the contrary.

Setting the robot arm to describe a pentagon, The shape can be built up to form a five sided enclosure. Once the shape has dried out, it can be turned at 90° to create the floor, walls and pitched roof of a notional house. Sadly, this is Wendy house architecture; The units come in one piece with concrete floors as standard. To make a larger “house” two units are butted together and the joints between the two (as witnessed on site in the mock-up) don’t bear analysis. 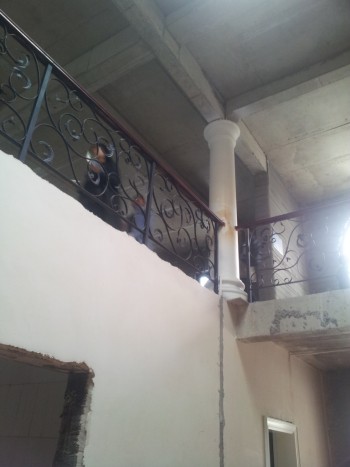 Suffice to say they are grouted, finished by hand, look terrible and don’t work.
The huge mock-up house that featured in all press stories – a house with a floor area of over 1,000m² – has been constructed out of the precast, factory-made blocks. Allegedly, this is the “3-d printer” inventor’s dream house. Unfortunately, it is more of a nightmare, comprising the shell of the building and a building site within. Admittedly, this company is not architects and it is building prototypes rather than holiday homes, but the design does not show this system in a positive light.

One immediately apparent flaw of this building system is that the large number of joints between the built-up layers of each precast unit clearly introduces a horizontal weakness, allowing rainwater to freely penetrate from the outside to the inner surface. This is no small matter as the walls were stained and damp and the floors were puddled. A fatal flaw that needs to be rectified.

The final criticism is left to the manufacturer itself. On the third floor of this huge building the pitched roof construction has been built in concrete using conventional methods – using shuttering to form columns beams and slabs, etc. I was told that in order to finish the building quickly to meet the press deadline, they choose to complete the top floor using conventional concrete construction rather than their own “printed” system. Apparently it was quicker and also slightly cheaper. 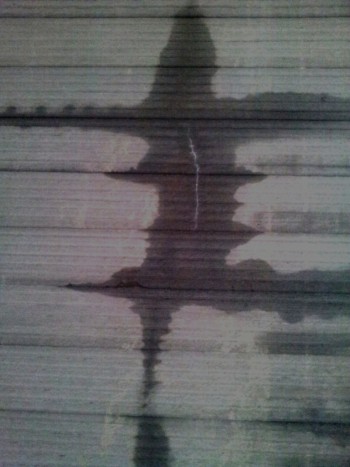 However, for all my criticisms, when all is said and done, this is an interesting intervention in the housing debate in China and shows that having an ambitious programme of innovation in the construction industry, could potentially change things for the better, in the long term. This particular manufacturer even talks about printing houses on Mars in the not too distant future. For all its faults, it’s a shame that such imaginative, challenging thinking has ebbed out in the western housing market.