Home » Articles » Free Will: An Illusion?

Free Will: An Illusion? 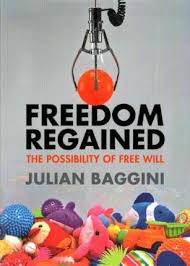 Free will is an illusion. Quite a claim, and one that dominates much contemporary scientific thinking, and the pivotal driver for Julian Baggini to write his latest book Freedom Regained: The Possibility of Free Will.

Baggini is a much-respected ‘popular’ philosopher, marked out by an ability to offer a nuanced, insightful take on complex subjects. Here, through some compelling narratives, he grapples with the principle ideas and assertions around Free Will, including the extent to which we possess it and why it matters. Drawing on a range of thinkers, scientists, philosophers and expert witnesses, he lays out the arguments in chapters that are dealt to the reader like a deck of cards – The Demon, The Neuroscientist, The Geneticist, The Artist, The Dissident, The Psychopath, The Addict, The Philosopher. Turning each over, he examines many different perspectives, unpicking complexities, while posing crucial questions: What does free will and its limitations mean for our sense of agency in the world, our ability to make meaningful choices, and for our sense of freedom overall? What levels of responsibility can we assume for our actions and in turn, assign to others for theirs?

Neuroscience, genetics, and materialism root behaviour in matter and the physical laws of nature, where outcomes are predetermined. ‘We are not the conscious authors of our actions’ writes free will denier and neuroscientist, Sam Harris. Rather, he says, thoughts merely appear in the conscious mind. We may feel that we have made choices, but neuro-scientific research shows that our decisions originate in the subconscious brain – diminishing the drivers for our desires, beliefs and feelings to mere epiphenomena – the by-products of physical or neural processes.

To load the dice further, genetic science also claims that much of who we are is predetermined – whether IQ, key character and personality traits, or a predisposition to certain illnesses and addictions. For Baggini, social and cultural environments also act as powerful determinants of our character.  However, he is keen not to get lost in the usual arguments of nature vs. nurture insisting that it is a combination that contributes to making us who we are: “In accounting for who we are, nature + nurture = 100 per cent. You are shaped by forces beyond yourself, and do not choose what you become” he says, “and so when you go on to make the choices in life that really matter, you do so on the basis of beliefs, values and dispositions that you did not choose.”

Nevertheless, Baggini also asserts that “it is only by recognising how much is not in our power that we can seize control of that which is”.  And in essence the aim of the book is to show that the existence of free will is compatible with recent scientific research rather than undermined by it. The arguments against free will are contested carefully – not so much to refute the science, but instead to show that it doesn’t offer us a full picture. He positions the scientific view as a faulty optic, one which “destroys only a straw man version of free will”, one that neglects human values, meaning and the kind of social freedoms that are worth having – and which we should claim. To convince ourselves that we are entirely prisoners of circumstance and preconditioning – and in doing so, excuse ourselves of responsibility for how we are – is to miss the full breadth of human experience. He is emphatic that if free will is understood only in some free-floating sense – an unconstrained, directionless freedom – then it becomes meaningless. Ultimately, our freedom is founded upon and developed from the very acceptance of who we are and an understanding of the constraints we already have.

This book broadens our understanding of free will through in-depth encounters with ‘expert witnesses’ which are used to probe some of the misconceptions that dominate the debate.  A conversation with Grayson Perry in The Artist chapter illuminates the relationship between subconscious output and conscious control. Perry is initially dismissive of freedom in its current popular manifestation, seeing it as being without constraint, without direction, and often abstract. However, he reports that in early stages of his work, the absence of conscious control is both necessary and liberating for the expression of who he is, deliberately allowing his biographical, social, and historical conditions to imbue and fuel his art.  Ideas are ‘emerging’ he says, and it doesn’t mean a complete absence of conscious control. Rather, conscious deliberation of subconscious output is a key part of the process of editing, revising, and reviewing –a critical role for the conscious mind in shaping the final output.

The Dissident chapter brings together a group whose individual stories of inhibited social and political freedom highlight the very human need to be able to communicate one’s fundamental values through free expression.  A consensus that comes from their discussion is that in striving for freedom against oppressive social and political contexts, there is a sense of having no choice – “I could have done no other”. But Baggini demonstrates how a sense of having ‘no choice’ in behaviour and actions can be transformed from a negative limitation to something potentially liberating in protecting one’s identity and beliefs. It’s here in the course of that struggle that we extend our sense of freedom as being more that an absence of constraint. It also allows us to see how education and knowledge are essential and contributing factors to critical thinking, how we can recognise, consciously deliberate, and then edit the beliefs and values we inherit. It places us beyond a passive acceptance of the lot we are given.

In conclusion, while valuing human agency is at the heart of this book, Baggini still doesn’t quite seem to give enough credence to human self-determination and our capacity to change the script we may have been handed. In the play-off between philosophy and science, perhaps not enough room is given to psychology and its important role in casting light on the relationship between subconscious and conscious mind.

That said this book is an important contribution to the debate. It touches on many relevant and weighty topics around freedom, responsibility, identity, and importantly the capacity to change our own future. Ultimately it is the questions raised in this book that make it a compelling and stimulating read. There is no trump, no ace in this pack of cards. Baggini certainly succeeds in re-cutting the cards to show a different and more meaningful view of free will – one that offers us a fuller hand in our own lives.

Freedom Regained: The Possibility of Free Will is available from Amazon UK