What if Architects became Developers? 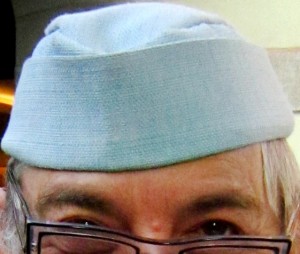 Matt Bloomfield discovers that Roger Zogolovitch writes as well as he builds, but notes that good housing doesn’t come cheap.

Zogolovitch, R. (2015) Shouldn’t we all be developers? Artifice Books

Electioneering at the start of summer 2015 has brought the issue of housing shortages out of the architectural press and into the mainstream. The major parties promised that they would oversee the creation of two or three hundred thousand new homes per year, a great increase on the current completion rate of 120,000. For one of the richest and most technologically advanced countries in the world, the physical act of erecting a building is not difficult but we have created several politco-economic barriers for ourselves. While demand for new housing is evident, supply is restricted by a convoluted economic situation which allows a developer to make just as much profit by not building houses as they would if they fulfilled their role properly.

Roger Zogolovitch’s new book, “Shouldn’t we all be developers?” looks into the current crisis around housing, finding problems not just with the supply of new homes but also their quality and puts forward his solutions. Unsurprisingly the solution comes in the form of Solidspace, the property development company which he founded. 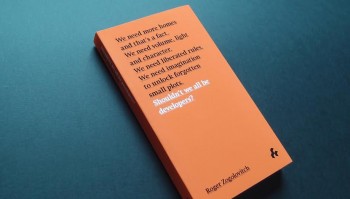 The handsomely bound volume (who publishes on 180gsm?) comes courtesy of Artifice books, and puts forward a clear, concise and quite enjoyable argument. But maybe the fact that the whole study is London-centric just exaggerates every success and failure of the housing market.

The book is edited into nine chapters which address individual elements of development as Zogolovitch sees them; Planning, Land, Design, Brand, Money, Interiors, Materials, The Developer and the State; and is topped off by case studies of Solidspace’s completed projects. Each of these chapters in turn is split into an analysis of current short-falls quickly countered by Zogolovitch’s polemical solutions.

This publication therefore acts as two books in one. The first half of each chapter is a very well informed examination of our current situation with frequent comparisons to historic precedents, and the figures to back up claims of where we have gone wrong. Through this, Zogolovitch charts the discrepancies between house price inflation which has averaged 20% over the last decade compared to retail price inflation of 2%; and the increase in mortgage value from two times annual income when they were first introduced to 14 times now. It also looks at, inter alia, the monopolisation of the housing market by giant developers that are too big to fail, and the practices they utilise such as land-banking and post-planning but pre-construction sales.

Zogolovitch then illustrates his ideal scenario, one chapter at a time, to argue for the proliferation of small scale developers to work on gap sites throughout London. These, he hopes, will win tenders, buying public sector brownfield land auctioned off by the London Land Commission, delivering housing good enough and cheap enough to make the large developers think twice about their approach. These propositions are coupled with slightly wishy-washy asides, featuring invented characters such as Paul and Freda who move into a Solidspace house and (surprisingly?) really rather like it. These imaginary proposals however, appear to be less joined up than his analysis. For instance, it is not clear how the great estates that shaped much of what he values in London could be adapted into a model suitable for gap sites. 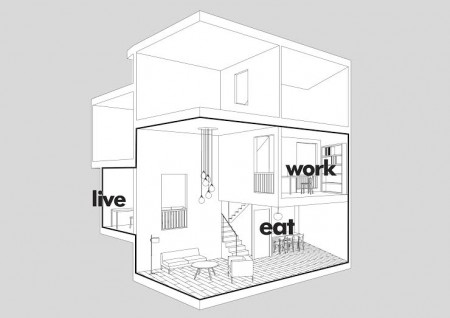 It might be true that Zogolovitch and Solidspace are capable of delivering more successful housing than a conventional developer, but given that their output so far has been ten units in twelve years the definition of success is open to question. Its approach  comprises the implemention of several split levels within a property, such that a three storey building may have six half floors connected by double height spaces and internal balconies, placing a great emphasis on volume and light. Their close collaboration with a roster of talented architects has won them RIBA awards and has seen them shortlisted for the EU’s Mies van der Rohe Award.

Zogolovitch deals with this trademark approach in his Branding chapter, subtitled “What if John Lewis made homes?” It is here that the quality of a house is centre stage and where the Solidspace approach is most significant. Rather than Taylor Wimpey’s mass produced subtopian pastiches and deposit boxes in the sky, there is an argument for real diversity in our housing stock, delivered by small scale developers who don’t have so many economies of scale to concern themselves with.

This does however present a significant contradiction inherent in Zogolovitch’s solution to the housing crisis. Once a property is brought to market; designed by a good architect, built by a good contractor, branded with a fashionable style; someone will profit from it. If not the developer then the first owner will sell on or let out. We are left with the question of whether good design can remain cheap on the open market.

Furthermore, can an architectural solution be applied to an economic problem?

————-
Matthew Bloomfield is a Masters student at the University of Sheffield. Twitter: @Bloomfield_Matt