Home » Articles » Home is where the Art is

Home is where the Art is 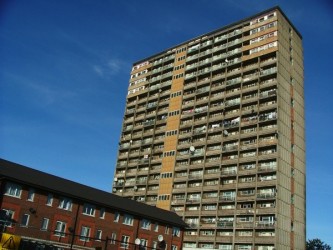 by Pierre Shaw | 2 March 2016
‘Re:Home’ is Cressida Brown’s revisit and revision to her 2006 play, ‘Home’. This new version is set and performed in-situ at Waltham Forest’s infamous, and now demolished, Beaumont Estate high rise tower blocks.A decade ago Brown’s play saw audiences meander accompanied, by an ensemble of actors through deserted corridors, empty living rooms and damp kitchens in Offstage’s immersive dramatisation of the stories and memories of inhabitants of the condemned estate. Now that the towers are no longer there, this new version is something of an homage to their memory. 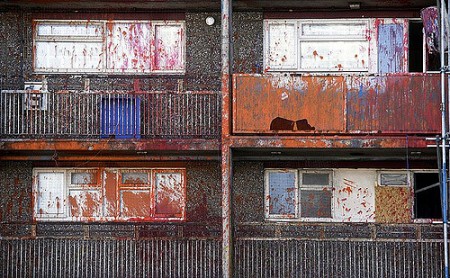 A site-specific performance emotionally and sensorily involves an audience beyond the static confines of the traditional theatre. A tactic pioneered through the 1960s and 70s, site-specific (or environmental theatre) often requires the audience’s active involvement by experiencing the reality of the plays setting. One of the first examples of this was Luca Roncon’s ‘The Laboratorio di Progettazione Teatrale di Prato’ in 1976, set in Prato’s Fabbricone warehouses where architect Gae Aulenti had designed a series of Baroque-influenced sets, raked at an angle, that began to question inherited audience/spectator relationships.

Brith Gof’s in-situ performances (1989 – 2003) were cast not only in specific built works but weaved the living memory of communities’ stories around these spaces and mythologies to create dramas that poetically conveyed imagery of place through time that were immediately relevant to an active audience. The decision to remove a performance from the theatre and into a space that is a part of an audience’s history is a political one, allowing the spectator to live through the environment and decisions that become a direct dissemination of the living history those involved.

More recent interpretations of environmental theatre such as Deborah Warner’s ‘St Pancras Project’, 1995 and The Rift’s performance of Kafka’s ‘The Trial’, 2003 demand of the audience that they move through a series of carefully curated spaces becoming integrated into a promenade of actors, who speak directly to audience members to to shift and shape the dynamic performance to suit that particular that audience.

After having gained a reputation for its drug dealing networks, gun trafficking, stabbings, suicides and gang culture, Waltham Forests’ 1960’s tower blocks were condemned and scheduled for demolition and redevelopment by developers and housing association, London and Quadrant. Of its original 4,500 occupants, only 200 or so remain today.

Brown’s original staging of ‘Home’ 10 years ago, is inclusive of the era’s experimental, audience-inclusive and politically engaged theatre. The script is built from the interviews with local people, using their actual words to reconstruct the memories and walls of St Catherine’s Tower. The play’s success was the result of a time-bound, place-bound meaningful performance that opened a direct dialogue between those in a community on the edge of physical and emotional destruction. In the words of Brown ‘this play can never ever be done again’. This temporal fragility highlighted the weakening support to which the Beaumont estate community owed its existence. This theatre was a documentary: a record of a political moment.

The setting – the home – for Brown’s ‘Re:Home’ is Hackney Wick’s The Yard. This appears to be a similar documentary-style presentation of the direct testimony of the inhabitants of the Beaumont Estate post-redevelopment. The performance mixes the views of local residents, before and after the towers’ demolition, in what is at times a disorientating but exciting experience as actors exchange a decade of memories. The dialogue contrasts the banality of everyday chat with excerpts of real emotional attachment for a lost community: one attempting to redefine itself after its dissection. The stories of Mark, Sean, Nathan, Darren, Ryan and the murder of Frankie on the estate portray the collapse of the community. Their accounts, amid the arguments for and against redevelopment of the estate over the previous ten years, help the audience to engage with the complexities of a dispersed network of family and friends. 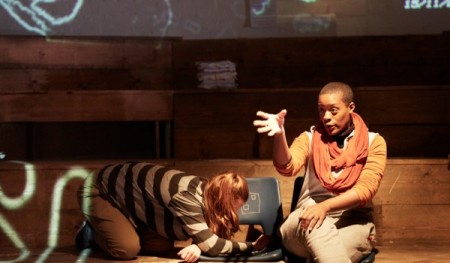 However, the success of the play ends here as a piece of documentary. This performance is enacted within a former warehouse, giving it a local colour but missing the authenticity of the 2006 performance, dramatised in the very rooms of the people whose words were being spoken. This was consciously an apolitical decision. Actors and spectators thus regained their traditional roles, separated by time and space and ultimately losing the depth of meaning contained within experiential theatre. The audience’s questioning of self identity and their ability to develop an empathetic understanding of place was hindered by the fourth wall; active participation was muted and the play failed to get off the ground in the way that the first documentary had, a decade ago.

An after-theatre discussion reinforced this apolitical standpoint with the debate unable to focus on the political centre of the ‘regeneration’ debate. The panel’s reiteration of recorded messages and memories – although evocative at times and directed toward a meaningful argument by Professor Loretta Lees of LeicesterUniversity – could not thoughtfully analyse the affects of London’s changing social geography. The first had been a performance; this was a play: the first was agit-prop, the second was too passive, unable to engage the historic anger at the destruction of the Beaumont Estate nor satisfactorily convey the reality for the people who now live there.

Brown’s decision to rehouse Re:Home inside a theatre, removing its true political power, is a reflection upon the wider context of today’s apolitical politics in which the left and right can no longer be distinguished. In today’s disenfranchised times, the political engagement and protestations that were more common a mere decade ago, meant that performances could be meaningfully committed to place, and unfearful of provocation. In Brown’s second attempt, we see a retreat to the comfortable familiar, the safety of the centre ground, where we, the spectators, are simply observing spectators.