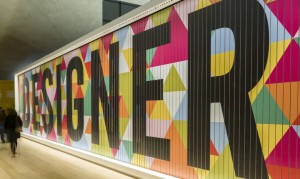 Author to over 50 books, founder of Habitat, leader of the Shad Thames redevelopment, influential restauranteur and prolific designer, there is much to laud in Sir Terence Conran’s contributions to London’s dominant cultural scene. Since the founding of his Design Museum in 1989, perhaps the most admirable yet understated of his achievements, a concerted effort has lingered to establish an institute of pure design, capable of rivalling the prestige and respect enjoyed by London’s existing titans of culture. The supremacy of art and music, held aloft and aloof from the millions attracted into the lofty volumes of their temples, has provided an air of humility and necessity in the desire to highlight contemporary design as integral to the value and quality of life we now enjoy.

Unfortunately, anyone who has visited the original home of the Design Museum, a disused banana warehouse in its previous life, would have noticed two glaring faults. Firstly, the anonymity of its peripheral location, slotted in-between the warehouse apartments of the Shad Thames and denied the convenience of Central London’s tourist footfall. Secondly, a comparatively under-whelming experience of its rich content, squeezed into a cramped series of rooms compromised by the constricted volume of the existing building.

These limitations should be kept in mind when we consider the incredible coup that has been achieved through the Design Museum’s rebirth in the former Commonwealth Institute. Opened in 1962 as a monument to the diverse colonies of an already dying Empire, its unmistakable paraboloid roof and vast curtain wall were left to gather dust after a belated retirement in 2007. Once a monument to Britain’s imperial supremacy, its presumptive fate was as yet another abandoned relic, facing the unsentimental hand of speculative development. The efforts of Deyan Sudjic, appointed director in charge of the move 10 years previously, has afforded the Design Museum with both a major presence in London’s central zone and a suitable increase in its original space. The £83 million redevelopment has involved the efforts of a wide range of funders, including the Heritage Lottery Fund, Swarovski Foundation, Art Council England and Sir Terence himself. 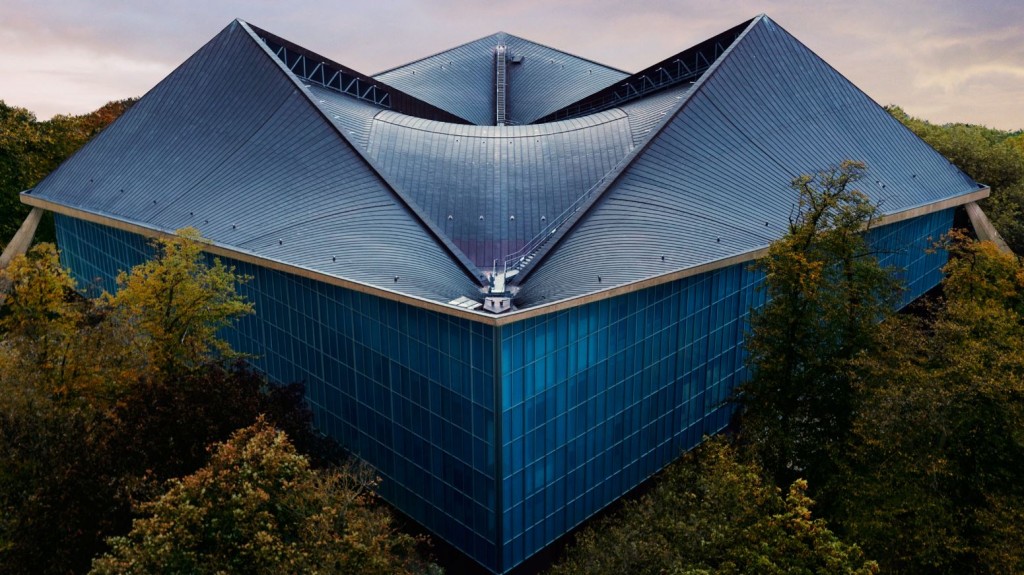 The elephant in the room, specifically developer Chelsfield’s ownership of the original building and site, has been the target of most of the unfavourable press. Compromised by the Institutes’ listed status, the developer has been forced into a classic S106 compromise; a £20 million contribution to the redevelopment and a rent-free 175 year lease in exchange for the right to build three apartment blocks on the existing site. The bitterness inherent in negative reactions against the new Design Museum almost uniquely stem from this arrangement, left leaning columns and comment sections have been overly keen to point out its ‘developer-led-restoration’ and London’s ‘cultural-real-estate complex’.

Such obsession with luxury apartments should not overshadow the fact that the Design Museum has realised a hard-fought dream without sacrificing its autonomy as a privately funded institution. Equally such cynicism should not detract from the spectacular revival of a unique piece of London’s heritage, if not for the aspirations of the Royal Borough of Kensington & Chelsea, it may very nearly have become a casino. One need only cringe at the misfortunes of the Art-Deco Odeon on the opposing street.

The complex renovation has required the collective expertise of OMA, Allies & Morrison, Arup and John Pawson to piece the jigsaw like interiors into the ruined shell. In his opening talks OMA’s Reiner de Graaf, responsible for both the design of the apartment blocks and structural solutions, was quick to mention the incapacity of the original structure to accommodate any new function, requiring an old building to become ‘new’. The technical solutions themselves are a fascinating exercise in structural problem solving. 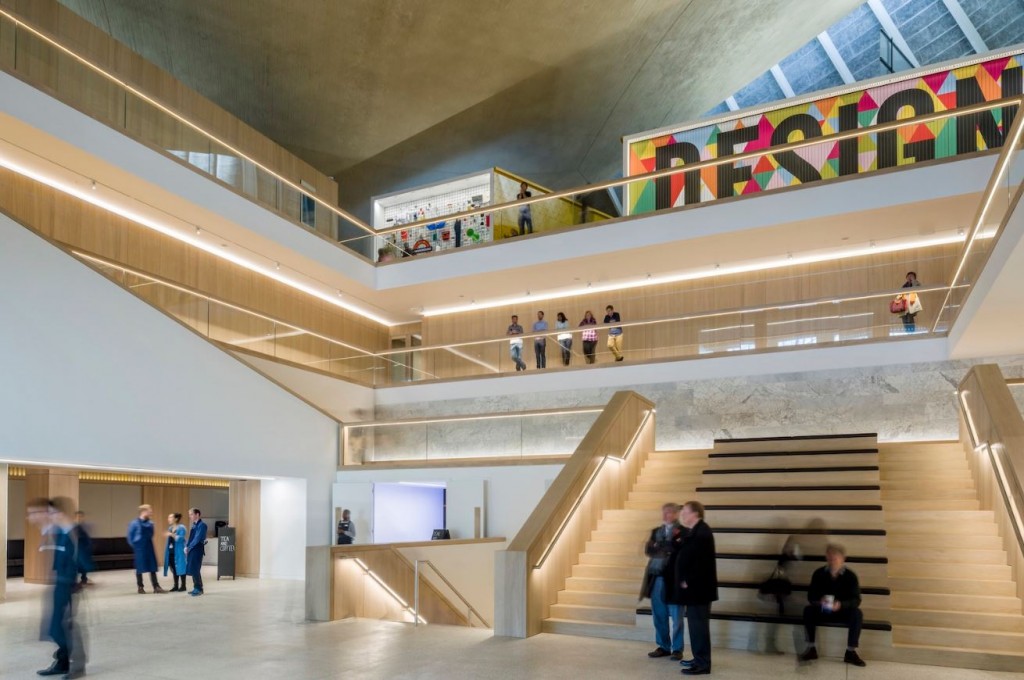 The original floors were stripped, requiring the use of a temporary steel structure 20 meters above ground level to support the preserved roof. Subsequent pile foundations were provided, over which a new concrete slab had to be cast to facilitate the simultaneous excavation of two basement levels underneath. Still following? The original facade was replaced with a meticulously detailed double glazed skin that resembles the original whilst improving insulation and day lighting standards as its cumbersome ancillary wings, attached to the original building, have been removed to provide the remaining site with an open and useable landscape semi-permeable to the neighbouring playing fields of Holland Park.

The cumulative result is a museum that is as much a spectacle as its collections, from the first step you take into the atrium the raw beauty of the hyperbolic paraboloid roof structure, supported by its thick buttresses, is framed within John Pawson’s interior scheme. Pawson’s trademark minimalism translates into a predictable palette of oak, LED strip lights and white rendered plasterboard, though the interior is beautifully detailed to a surprisingly meticulous extent, as harmonious as it is inoffensively blank, helpfully mixed with the occasional splash of colour from incongruent exhibition pieces and recycled materials. The atrium itself is a throwback to the original, maintaining its original expanse in accordance to planning restrictions by staggering at each floor level to open up at the top. A relentless sea of oak panelling frames the entire feature, its opposing staircase placements forcing circulation to shift from one side to the next, reminiscent of an open cast mine in the designer’s own words.

To wander around the museum reveals a welcome expansion of program kept possible despite the vast atrium carved out of its centre. The available space has been tripled to 10000 sqm, with the expectation of receiving 650,000 visitors in its first year. As such, the new program reads exactly as one might expect from an ambitious client with an unrestricted imagination or perhaps a Christmas list hurriedly scribbled down by an excitable altruist. 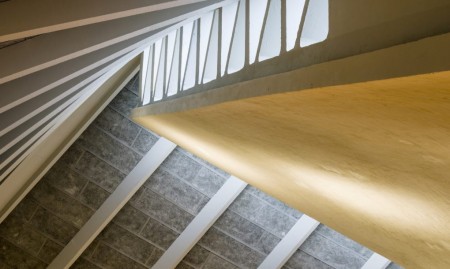 An auditorium, museum collection store and two double height temporary exhibition spaces, a coffee & juice counter and bespoke shop are provided across the basement and ground floors. New educational facilities include the Swarovski Foundation Centre for Learning, Conran’s flagship Designers in Residence program, the Sackler Library and Archive, the Il Cerchio di Giotto film studio and Johnston Nijman Meeting Room, all collected on the first floor. The top floor contains an additional restaurant, regrettably named ‘Parabola’, with a member’s room, teaching spaces and the crown jewel of Conran’s vision; A new permanent exhibition on the top floor, finally offering that paradigm of free entry to the public. The intensity of program is a welcome statement of intent, the potential emptiness of rhetoric behind this ‘Cathedral of Design’ hoping, in Sudjic’s words, to inspire future generations and unite design tribes as a place to remain radical and avant-garde is at the very least backed by the required facilities.

Sadly, for everything achieved in the new Design Museum, it is not immune from criticism, especially not the sort that can be pinned on any number of planning restrictions. The atrium, as enjoyable as it is to experience from the ground floor, is too high, its stagger abruptly halting at the first floor to rise vertically in a way that smothers the peripheral edges of the roof and conceals the intricate joints that piece it together. Two architects on hand were keen to blames issues with service over-runs and program density, which would be understandable if not for the strictly minimalist aesthetic chosen for the interior scheme. Sharp lines and ninety degree angles create an unfortunate box-within-a-box aesthetic that just becomes harder to ignore as one travels around the interior, further perpetuated by a seemingly ill-advised palette of sterile materials. 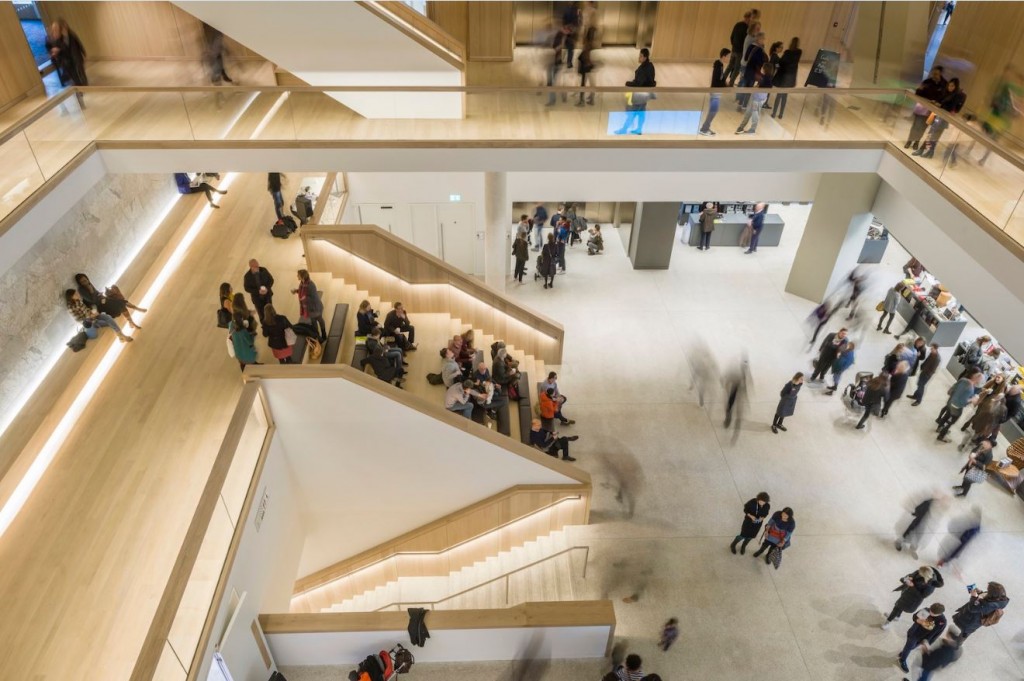 It is almost too clean to be touched, and its architects stated intentions that is will remain so bring up questions of exactly how this key space is meant to be used? The first floor hosts a small exhibition of construction stills by fashion photographer Kolo Bolofo, showing the rawness of the curvilinear roof and former atrium in all their glory, so why an arch minimalist was deemed best ‘to respect the spirit’ of the old building is difficult to grasp. Sudjic’s long history with Pawson, including the authoring of a retrospective of his work in 2005, may offer some explanation.

These complaints may hopefully prove to be over-zealous as the Design Museum matures into its new home. There is ample room for informal display and, whilst the roof is unable to support anything, there are hanging rails and expansive flat surfaces ripe for installations, both physical and virtual. The success of the Design Museum will ultimately hinge on its ability to assimilate visitors, both formally and informally, with the everyday objects that it celebrates, not through the sanctification of its collection through pedestals and security barriers. 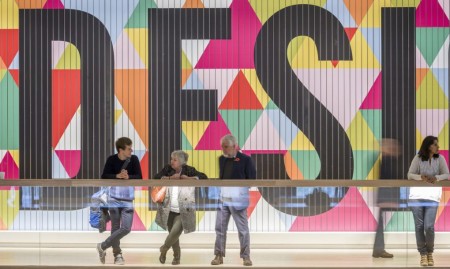 The role of design in the mainstream of our lives, for too long marginalised as more of a luxury, requires a very different exposure to the public, such that a curation team too timid to utilise the full arsenal of surfaces, railings and floor space will prove counter-productive. At worse, the Design Museum may mature with an architecture that it is too nervous to touch, once more cramming its eclectic objects into limited parts of its new floor plan for the sake of unbroken veneer. At best, we may find an entirely new type of institution unrivalled in its capacity to educate the wider public on the importance, and of course fun, of thoughtful and innovative design.

At this early stage, the new program and proliferation of spaces should render the latter far more likely. The result is anything but stuffy and for all the lamenting of London’s privatised sprawl, the care and aspiration one individual may have for his City and the future of his profession is very much alive and well. For what it’s worth, this cultural upstart may be Sir Terence’s greatest contribution yet.