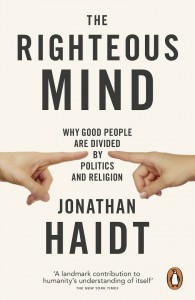 After the election of Donald Trump last year protesters chanted that he was “not my president”. Hyperbolic rhetoric is the prerogative of the protester but for years now it has seemed that the USA is not one but two countries.

Jonathan Haidt’s book The Righteous Mind has been hugely influential in understanding this problem. Haidt sees the political differences between red states and blue states as essentially moral ones. The residents of red and blue states live in different moral universes. This is a commonplace observation but liberals have tended to assume that they are on the “right” side of history. According to this view society is supposed to be advancing inexorably towards increased diversity and more rights for minorities and women. This view reached its zenith with the election of Barak Obama which was seen as a victory for a more multicultural, tolerant America. Conservatives, by contrast, have tended to be seen as backwards, bigoted and uneducated, a dwindling demographic of “old, white males”. Michael Moore encapsulated this when he described Donald Trump rallies as “The sound of dying dinosaurs.”

Haidt turns this narrative on its head. What if liberal values were not the culmination of human progress but in fact an aberration from the normal state of human relations? Everyone knows that conservatives value God, family and flag, but is there a way to assess how these values stack up against liberal values of tolerance and diversity?

Haidt is highly critical of moral theories derived from the Western canon of Plato, Kant and Mill. These theories depend on a single moral principle that one should follow such as the avoidance of harm or the observance of rights. Haidt argues that human morality is dependent on a wider set of principles than these. He divides moral values into six basic categories. Liberals tend to place a premium on compassion, fairness and freedom, but conservatives believe in all of these but also respect for authority, loyalty and a sense of the sacred. Haidt argues that because conservatives utilise a wider range of moral imperatives their morality is deeper, more integrated and more lived in than that of liberals. What he is saying here is that liberal values denigrate the idea of strong ties to the people around you, or who are similar to you, in favour of weaker ties to people who have nothing in common with you.

This is an important insight. If we take a secular form of morality, like human rights, it is possible for an individual to believe in it but it does not provide a focus of loyalty to rally around like a nation or religion. Haidt is a liberal but he understands that if liberals are to win power on a consistent basis they have to understand their ideological opponents. Given the worrying division in the US at the moment this appeal to understand the other side is welcome and it provides lessons for this side of the Atlantic as well. It is commonplace to attribute Brexit and the growth of support of populist parties to xenophobia or anger at declining living standards but it may well be that the nation state can command the sense of loyalty of Europeans better than the supranational EU can.

The Righteous Mind, however, runs into difficulties when it tries to explain why people hold differing political views. Because the political divide in the USA corresponds precisely to a disagreement over basic values between Red and Blue states, Haidt is able to conflate politics and morality. Haidt’s theory of morality is based on the dynamics of group behaviour. He defines moral systems as:

What is striking about this definition is that it is akin to the kind of definition an anthropologist might give to the moral system of a tribe rather than a guide to how we should live. Rejecting prescriptive definitions of morality, Haidt places a premium on the group loyalties that people feel, loyalties that we evolved to feel. He thinks that we thrive better in tight knit groups and that this groupishness is hard-wired. This is why we tend to emphasise with our own tribe in particular and see the other side as wrong or even evil. This is why people are more likely to believe conspiracy theories about the other side. Democrat supporters are likely to believe that Donald Trump is a puppet of Russia, while republicans believe that the “deep state” is trying to undermine Trump.

But dissolving groups wouldn’t bridge the political divide. Haidt notes Putnam’s observation that cultural diversity can weaken communities. This causes people to tend to retreat into solitary life rather than engaging with the wider public. Haidt calls instead for more dialogue between different groups. He notes that much of the deadlock that afflicts the US Congress started with the reforms that compelled congressmen to spend more time in their own states. Congressmen across the political divide stopped socialising with each other and consequently saw each other as enemies. For Congressmen to mix more outside the chamber, he suggests, might lead to more co-operation. Haidt is essentially a calling for empathy between different groups.

Haidt may be right that people thrive better in church groups, bowling clubs etc, but the public is surely more than a just collection of these small groups. An active public rather depends on shared values, but if we cannot rely on universalism then where do these shared points of commonality come from?

Haidt tries to build a basis for morality from evolutionary science but this is speculative at best. Take his discussion of the moral precept of sanctity for instance. Sanctity, the idea that some things are sacred and others profane is hard to conceptualise rationally. If you present people with the hypothetical situation of someone engaging in a sexual relationship with a sibling and using contraception they struggle to come up with a good reason why this is wrong unless they take the view that some things just cannot be done. This irrational impulse Haidt attributes to the instinctive feeling of disgust that first evolved in response to our need to find out which foods were good to eat. This attempt to build from basic instincts to moral systems, particularly religion, doesn’t convince. While religion seems to be based on disgust for the profane given the rules about eating and hygiene that characterise many religions it is also based on the idea of the sacred and higher values.

While Haidt believes that religion is better than any secular moral system for binding people together, he only regards it as a useful social glue. He does not talk about the content of these belief systems. It is not clear where the Christian idea of the dignity of each man came from or whether it is a more preferable moral value than that those underpinning slavery in Ancient Rome.

Haidt also draws from the research that suggests that the brains of conservatives and liberals are wired differently.  It appears that conservatives are more wired to perceive threats than liberals, while liberals are predisposed to seek novel experiences. Haidt posits that these different physiologies might lead to different life experiences as someone with a novelty seeking brain might leave their home to go to the big city and imbibe the liberal values there while someone with a brain that perceives threats more might stay in their home town and retain small town conservative values.  But if conservatives are more predisposed to be fearful, then why are liberals more fearful of global warming while conservatives don’t care. Similarly, how can we explain the kind of extreme liberalism that attempts to force everyone into conformity in the name of anti-racism, feminism and LGBT rights? Haidt says that he doesn’t want to say that conservatives are from Mars and liberals are from Venus but by effectively reducing morality, and by extension politics, to science this is exactly what he is saying.

The transformation of politics from economic questions to a clash of cultures has rendered a lot of issues intractable as issues are presented as fundamental clashes of values. In an age where “safe spaces” and “echo chambers” threaten to divide people from one another a call for dialogue across groups and willingness to understand the other side is certainly welcome, but the common tendency to reduce politics to group dynamics or evolutionary theory only serves to ossify politics and entrench divisions. Haidt recognises that the status quo is contingent but, thanks to his scientism, cannot move past it. A historical analysis of why politics has become all about morals would be welcome in understanding not just US politics but European politics too.

The Righteous Mind: why good people are divided by politics and religion by Jonathan Haidt is available from Amazon UK