Book Review: The Road to Somewhere by David Goodhart 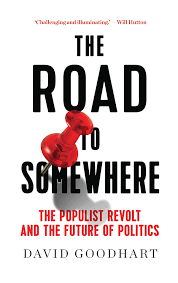 ‘The Road to Somewhere’ is a sometimes brilliant, but ultimately frustrating and flawed, attempt to understand contemporary Western politics, as seen through the apparent realignment in British society in the wake of the shock Brexit vote in 2016.

Relying on a wealth of surveys and polls, Goodhart  argues we are seeing the creation, or perhaps clarification, of “two great subterranean value blocs of modern Britain”; a new set of tribes which have arisen with the passing of the post-war class system. It’s testament to his writing that the new language he has created of ‘Anywheres’ and ‘Somewheres ‘ is already widely used and broadly understood as accurately beginning to describe the cultural fissure that Brexit laid bare.

For many appalled by the profoundly anti-democratic reaction to the Brexit vote, and the debate which has followed, there is so much in the book to admire and agree with, especially his coruscating analysis that for all their apparent open-mindedness and tolerance about society, liberals can cope with anything but dissent from their own world view.

But whilst admiring his insights, there is a profound flaw in Goodharts approach. The book reads as an anthropological study about something both familiar but also alien. Familiar, because he is talking about the here and now that we recognise; but alien because he’s tries to understand the world and people through data – which is very de rigueur, but not the way to change society. Most worrying for me is the idea that the Somewheres – roughly half of the population –  are somehow innately more conservative, more insular, and less able to cope with social change.

I reject the idea of Somewheres  as unable to cope with change in the way their rootless, globetrotting Anywhere cousins are able to. It denies so much of history, where those same people who might today broadly be called Somewheres  – those who don’t go to university, or are missing cultural capital via social networks, or who’ve never moved more than 20 miles from home – have understood and participated in the wider world around them –  because they lived in a time when politics and a contestation of ideas and interests was what defined people’s tribes, not skin colour, cultural experiences or university degrees. The reason this is such an important point is it’s this supposed inability of the Somewheres to cope which contemporary change, especially in relation to immigration, which the books entire argument rests upon.

Ultimately, this is a survey of modern Britain, written by an Anywhere, doing his level best to understand the Somewheres. A treatise on where the Anywheres went wrong, and how they might continue to govern, but just with more sensitivity to the values and conservatism of others. As Goodhart himself alludes to in the book, he’s calling for Anywheres to allow Somewheres more of a voice, more respect, and more of the political and cultural pies. “Anywhere freedom and Somewhere rootedness” he argues, have always been “in tension but have recently got out of balance in Britain”. His newly  coined tribes  are the world seen through Anywhere specs.

What’s really missing from Goodhart’s writing is any sense of agency. He reveals this most clearly in the final chapter, where his attempt at solutions to the current situation include ideas such as changing tax codes to “increase fertility”, of “keeping the workforce stable” and “rewarding those who strive to lead healthier lives”. He sees politics as about “managing change, most of which emerges unintended and unshaped by human agency”– this seems to me to be the work of a technocrat, who’s naturalised the world around him.

Goodhart’s aims are noble: he wants everyone to lead a fulfilling life but believes Somewheres are being failed by Anywhere overreach – economically, socially and politically. The zombie political parties we have today, and the disconnect between ruling elites and their people, is a result if the failure of ideas of the Anywheres; it is not because of an imagined innate conservatism on the part of the Somewheres. The current crisis about the way the world is shifting lies not amongst the Somewheres, but the Anywheres.

The Road to Somewhere: The Populist Revolt and the Future of Politics is available from Amazon UK