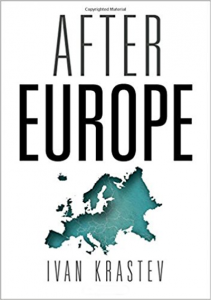 Ivan Krastev is a respected, left-wing intellectual and professor at Sofia University. He has written several pithy books, mainly about democracy. His commentaries are insightful, with colourful details and images enlivening his academic prose. His style is to spin out searching questions, ideas, observations and facts, as a cocktail mixed with his own opinions and conclusions in a take-it or leave-it way.  And it has to be said that while the basic mix is definitely worth the taking, his proposals are often best left, as his latest book confirms. So, what are the principled arguments and insights in ‘After Europe” and why is he so adamant an apologist and supporter of the EU, an organisation which equates populism in Europe with being anti-democratic?

Krastev is most insightful in his commentary on the “clash of solidarities”, as he calls it, whereby Western Europe trusts its national governments more than Brussels, but Eastern Europe trusts EU eurocrats to be more competent and less corrupt than their own leaders. First generation leaders of east European countries, post-Cold War, were keen to do everything to get into the EU. These same countries, however, now find themselves in bitter battles with Brussels over refugees and emigration as the EU seeks to humiliate them in turn. A fuller historical analysis would have shed much more light on this ‘east-west’ divide, although Krastev does correctly point to the inter-war mass migrations of peoples as an important factor. Caught between the Nazis and Stalinism, those in Eastern Europe not massacred were forced to return to homelands that resulted in the creation of very homogeneous countries, compared to the patchwork quilt of an earlier human geography under the Habsburgs. The reviled cosmopolitan domination of the Habsburgs was supplanted by that of fascism, communism, the Church (Catholic and Orthodox) and later the EU. East European nations have been continuously dominated by supra national institutions for over a hundred years, curtailing national sovereignty and the integration of migrants. Since East European countries, such as Bulgaria, have joined the EU, the scale of emigration has severely hampered social, economic and political development at home, while the young emigres aspire to join the ‘Anywhere’ class described by Goodhart. Freedom of movement within the EU has come at a huge cost to east Europe.

Krastev has further insights in his descriptions of the EU interventions in Greece and Italy, providing useful comparisons of their protest movements with the under-developed, spontaneous and localised nature of protests elsewhere. His thoughts on meritocracy and the creation of elites that are ‘Anywhere People’ leads him to sympathise with populists that demand sacrifice and loyalty from their leaders. He urges ‘a struggle over the nature and obligations of elites to reestablish a bond between them and the people’. Unfortunately, this is as close as he comes to siding with the peoples of Europe. He is more concerned at the disintegration of the EU. Comparing European disintegration under the Habsburgs with that of the EU he says “the only difference being that then it was their world that collapsed. Now it is ours”.

Krastev moves from a thoughtful start, where he assures the reader he wrote the book ‘not to want to save or mourn the EU,’ to, by the end, calling for its survival at all costs. Krastev asserts that the European project, as espoused today, is intellectually rooted in Fukiyama’s ‘end of history’ and following the end of the Cold War, the EU found itself caught in the challenge to liberalism as to how universal rights are to be reconciled with unequally free and prosperous societies. He asks the correct questions as to how the West can build on the Enlightenment to transform the rest of the world, but his attempt to answer them (lack of freedom of movement and inequality undermine the universal values of the Enlightenment, so we must fall back on doing everything we can to ensure the EU survives) reveals an innate conservatism.

For Krastev, democracy is defined by and confined to freedom of movement and equality. As the EU embodies and promotes these, at least within Europe, it must be democratic and as populist movements challenge them, they must be ant-democratic in nature. Liberalism now has a bad name and is associated by the populists with fear of mass movements into Europe and its decline in the world. It’s Liberalism and the Enlightenment that Krastev sees are the problem, not the EU, although he also blames those old cronies of Brexit, fear of Islamic terrorism, technology and globalisation. He sees the EU as a last hope for a fortressed continent. Immigration is needed for prosperity or we will end up with closed borders and everyone will need to work till they drop.

Krastev completely misunderstands Brexit, seeing it as an anti-immigrant vote. He gives little recognition to sovereignty, a word used only twice in the book. For him, sovereignty is the opposite of democracy and interchangeable with nationalism. He expresses concern at how European youth could ‘dangerously link democracy to national sovereignty’, but surely this is exactly what is needed now as democracy in Europe can only be expressed through national sovereignty. And he hates referenda as they block the work of the EU and they are ‘a tool for exclusion’, presumably that is of the EU.

Krastev’s conclusion is both pessimistic and conservative. Survival of the EU is the most to be hoped for, demanding that Brussels be more flexible and compromising. A strategy of survival could legitimise the EU, which he advises should not attempt to defeat its enemies, the people, but to exhaust them. I beg to ask what’s the difference? There is, however, much to commend in this book, by looking beyond his conclusion and considering more his lines of enquiry and historical observations.

After Europe is available from Amazon UK