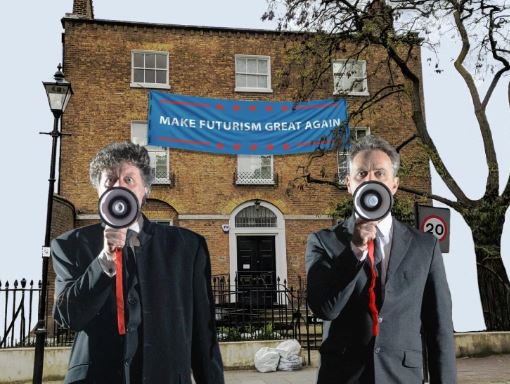 “Make Futurism Great Again”, currently showing at the Estorick Gallery is the culmination of a ten-year project by the Neo Futurist Collective. The art works relating to this project are interspersed with the main collection and comprise a mix of early futurist paintings, a collection of audio-visual displays and an exhibit of a light purple fluid that “captures the essence of the Futurist movement” (probably either invisible ink or something that dissolves paper given that Futurism sought to sweep away the past).

The heart of the exhibition, however, are the recordings of urban noise artist Joseph Young, accessible only by headphones. Sadly, a number of my fellow attendees missed these opportunities and walked past, or only listened to the recordings for a few seconds. I was not sure if this was supposed to be an intentional commentary on how most people consider true art to be visual but they were certainly worth listening to for the full five or ten minutes to ponder the meaning of the works.

Produced as part of the “Ballard of Skinny Lattes and Vintage Clothing” these recordings take inspiration from Luigi Russolo’s 1913 manifesto ‘The Art of Noise‘, which sought to go beyond the limitation of the wind, string and percussion instruments of the time and use urban noise as a new medium through which to explore music. Russolo ultimately saw his noise art as being in the pursuit of beauty. By contrast the contemporary noise artists aim to disrupt. 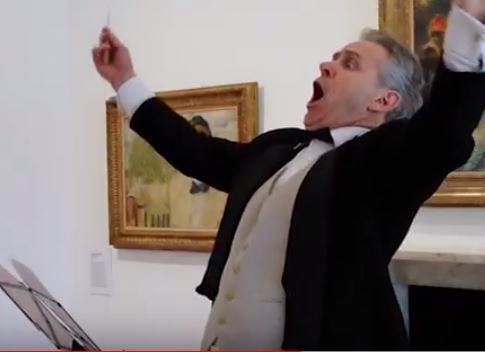 Much of this takes the form of an ironic attempt to take on the absurdities of capitalism; a disappointing approach as most run of the mill protest takes the form of an art project these days. The Neo Futurists’ fire, though, is mostly directed at the art establishment. “Art will not save the world” they say, against a chorus of pneumatic drills. Contemporary artists are satirised as pawns of gentrification; a process that, aided and abetted by the creative industry, squeezes the life and spontaneity out of city life so that the capitalists can mass produce art and culture in its place. They even poke fun at themselves with the brilliant “CarTet for ‘Vehicles of Italian Manufacture”.

‘Make Futurism Great Again’ attempts to capture the spontaneous sounds of the city and turn them into stories, exemplified by “The Shoreditch Riots” that captures overheard conspiracy theories on Wall Street just before the financial crash, juxtaposed with recordings from the riots of 2011 and mixed it to the sound of Hebrew songs. Altogether, this exhibition is something of a lament for an urban landscape that is disappearing.

There is perhaps some inevitability about this. Early futurists lived in a time of social transformation and rapid progress. As the Neo Futurist Collective website puts it they tried to harness “the power of technology uniting with the imagination of humanity”. They wanted “rid of facile, traditional rhythms” and wanted to challenge the excepted limits of musicality. During early performances riots broke out.  In a more sclerotic age futurist artists tend to satirise. It is a worthy position, but it remains true that art will not save the world. This, however, is an enjoyable – and thought-provoking – attempt to question it.

“Make Futurism Great Again” is showing at the Estorick Collection until 21st October 2018.