Over the last week, large groups of protestors have brought traffic to a standstill in central London. Gluing themselves to bus stops, pavements and Jeremy Corbyn’s fence. Standing on top of trains, barricading bridges, painting slogans on corporate headquarters and planting trees in the streets. Meanwhile, politicians remain on holiday or cower in Westminster. The police appear to have no idea what to do when confronted by a mass of people who don’t care if they are arrested. This is Extinction Rebellion (XR) – a new environmental protest movement that is spreading across the country.

Let’s explore three moments that have influenced the rise of this movement.

Brexit
The politics of anger, disillusion and frustration unleashed by Brexit is possibly the most significant. There are no statistics on the Brexit/Remain make-up of the environmental protestors but, to her credit, Dr Gail Bradbrook, self-styled co-founder of Extinction Rebellion told the Today programme that similar disruptive tactics would be “perfectly reasonable (to protest Brexit) if democracy wasn’t being honoured”.

The XR protestors – as Jon Snow might say – are mostly white, middle-class, and often elderly. They are demonstrating their frustration that environmentalism isn’t getting enough coverage in the press and that “conventional approaches of voting, lobbying, petitions and protest have failed because powerful political and economic interests prevent change.” The first claim might seem to fly in the face of reality for the rest of us who see climate campaigns, global warming paranoia, and environmental journalism at every turn; but the second point is the most contentious.

The conclusion drawn by XR is that democratic change is impossible and only disruption is possible. Rather than pledging to improve the democratic process; to hold people more firmly to account, they are campaigning to work around it. It is the democratic mandate that they seek to overturn, not capitalism. Forget the old-fashioned arrogance of the Occupy movement’s slogan: “We, The 99%”. Forget the stubborn Remainers’ assertion that 48% takes precedence. In this anti-democratic movement, XR relish that they simply need “the involvement of 3.5% of the population to succeed”. 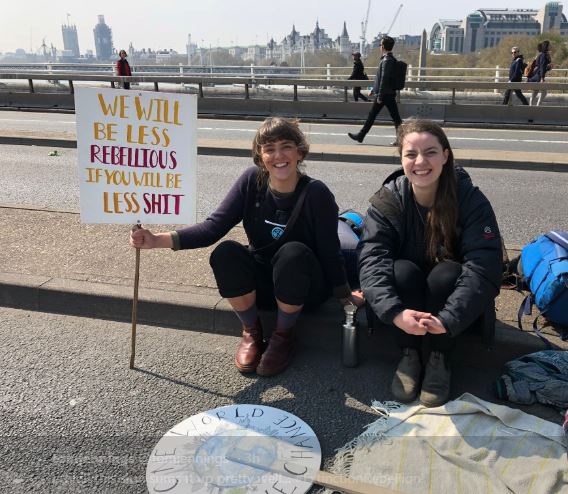 Revolutions, it is true, often begin as a minority vanguard interest but these are no revolutionaries. If they seek meaningful change, then we might have expected them to be campaigning for Brexit, for example. Indeed, XR are no radical opponents of the state, and seem to enjoy a rather cosy working relationship with the authorities.

Environment secretary Michael Gove thanks the campaigners saying: “we’ve got the message”; Polly Toynbee is “inspired”; and Sadiq Khan pleads with the protesters to “”work with us – the police, TFL – to ensure your safety”. Admittedly, the Gilet Jaunes’ environmental manifesto calls to ban plastic bottles and GM crops, but these minor points are over-shadowed by a progressive demand to re-industrialise. Most importantly they want to confront the authorities in France, leave the EU and exit NATO. The Gilet Jaunes are a radical, anti-state, politically progressive movement – even though they are relatively small number of activists. It is their aims, not their numbers, that mark them out as a qualitatively different to XR who state that “we are at war with life on earth”. XR is a loose affiliation of Third runway protestors, anti-fracking campaigners, anti-car/pro-cycling, and various vocal opponents of the oil industry and growth. Of course, there are many others who would identify merely as concerned citizens.

However, at the time when democracy is under threat, XR has emerged to play the reprehensible role of a happy-clappy eco-version of Gina Miller, deflecting the debate onto something, anything else. Lib Dem MP, Ed Davey has said that Brexit, was “an unmitig¬ated climate change disaster” sustaining the XR position that: “Why fight Brexit when the world is literally ending?” 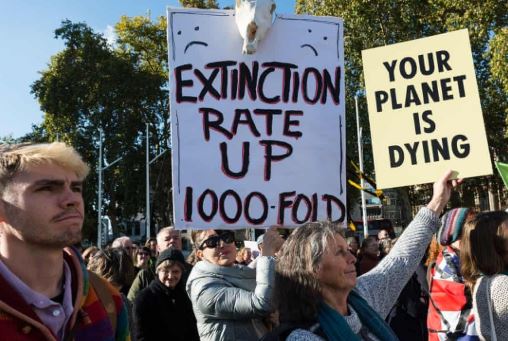 Of course, if you really believe that we are about to become extinct then all bets are off, I guess. Appearing on Good Morning Britain and fighting back the tears, Dr Bradbrook said: “I have two boys, 10 and 13, and they won’t have enough food to eat in a few years’. Is there any rationale for that idiotic claim? Has she lost her job? Has global food production closed down? Is she simply offering an ecological version of Project Fear?

Shouting: “The End of the World is Nigh” used to be the preserve of eccentric elderly doomsayers with sandwich-boards. Cue David Attenborough. But it is depressing that so many young people have accepted the baseless assertion.

Climate Strike
As the Swedish climate activist, Greta Thunberg becomes more god-like (recently blessed by the pope), so children’s authority as stewards of the environment has risen. This elevated status has enabled children to dictate terms with adults often taking their lead from youngsters who have grown up immersed in environmental politics. Thunberg instructs us to stop “talking about Brexit” and focus on climate breakdown. We must obey.

Increasingly those who should know better are awed by childish naivete. David Miliband (who he?) attended the environmental school-day strike with his son, while the mayor of Sheffield is reported to have said: “It’s as simple as action or extinction … [These students] are literally saving our bloody planet.” Children flouting the law and, in return having their transgressions ignored by the authorities, sets a precedent for more yet moral nihilism. 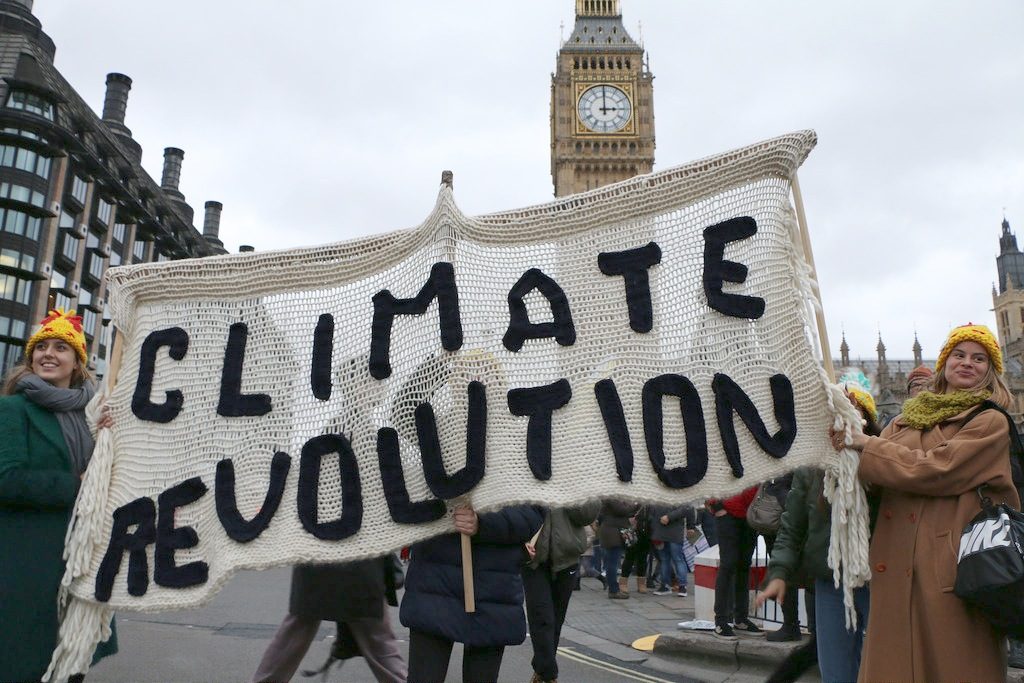 XR’s Roger Hallam, a PhD student researching political activism has been criss-crossing the country asking people to sign up to being arrested. He has not yet drummed up a schoolyard army of cannon-fodder infants, but he is getting a wide range of adults to sacrifice themselves for that “future generation”.

These are grandparents (and also younger adults) who – in increasing numbers – have volunteered to be arrested. Hallam cynically wants to use their incarceration as a tool to get publicity, but the signatories often say that they have nothing to lose (due to age) or that they think that their liberty is unimportant. On one hand this sacrificial gesture by older generations is a nice rebuttal of frequent anti-elderly comments by Remainers. That said, their renunciation of liberty is shocking.

The cultish nature of XR’s activities is a little spooky. Staged environmental die-ins, for example, are all-too reminiscent of Jonestown-style nightmare scenarios described by Shiva Naipaul as “obsessed with sin and images of apocalyptic destruction… instinctively thinking in terms of the saved and the damned”. We seem to have a perfect storm of democratic accountability becoming marginalised at the same time that a voluntary denial of personal freedom becomes acceptable. As the issue of individual liberty becomes little more than an irrelevance to this movement, who knows what anti-social expressions will follow.

Tottenham Riots
The breakdown in law-and-order and the dereliction of authority by the police in 2011 saw the streets given over to major riots and looting in north London. The police absented themselves as youngsters with grievances rampaged through the streets of Tottenham and Wood Green damaging vehicles and ransacking shops. For 36 hours, criminality seemed untouchable. One rioter claimed: “We’re showing the rich people we can do what we want.” 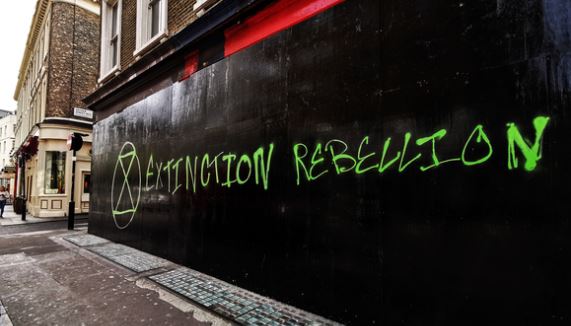 The middle classes were terrified, of course, so a more jovial version of rioting has been invented but in which rioters have been redefined as protestors or campaigners. Activists are casually spray-painting buildings with impunity, disrupting traffic and undermining the workings of businesses. The police are displaying the same timidity that they did back in Tottenham, watching while protestors run amok. (This must come as a shock to militant activists who remember the days when you could be arrested and beaten up for an “unlawfully assembly” of 12 or more people on the street).

The Guardian can now gleefully describe Marble Arch, Waterloo Bridge, Parliament Square and Oxford Circus as “under the control of protesters”. Actress, “environmental activist” and national treasure, Emma Thompson calls for international rebellion (and “a lot of fun”). Archbishop of Canterbury, Dr Rowan Williams has confessed our sins of loving “progress more than the planet”; and George Monbiot, of course, has advocated that we “overthrow our life-denying system”. Welcome to the London riots for the bourgeoisie.

While the rest of the country engages in a serious pre-Brexit row about how we salvage democracy and reinvigorate a new kind of politics, XR and its hangers-on consider this to be a distraction from the real emergency of climate change. Anything, it seems is legitimate to counter it, even the distortion of democratic accountability.

Over the last couple of years, a large percentage of the country has rejected demands for Citizens’ Juries to resolve Brexit because there is a justifiable suspicion that the questions will be loaded. Undeterred, XR demands the formation of Citizens’ Juries to discuss, debate and resolve the alleged climate emergency. But for XR the climate debate is over. These will be less Citizens’ Juries; more Diplock Courts. It is evident that while the activists of Extinction Rebellion recognise that the current ‘social contract’ has been broken, they fail to see that it is they who are in the process of burying it.