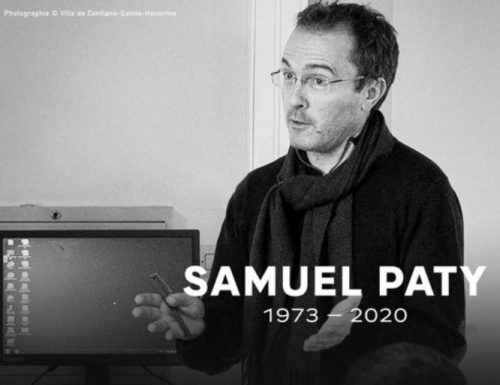 This is a short statement in memory of Samuel Paty, the teacher who was brutally murdered on the outskirts of Paris on 16 October 2020. A national memorial event for Paty was held in France on Wednesday 20 October 2020.

These meagre paragraphs are a show of sympathy, support and solidarity for Paty and more broadly for the idea of free speech, debate and educational open-mindedness that he has come to represent.

In writing this statement, I note that not one word of support has been made by the teachers’ unions in the UK, whether NASUWT, NUT/NEU or UCU et al. These organisations, built on a principle of working-class solidarity and support for those under attack, cannot seem to bring themselves to condemn this vicious attack on a fellow teacher. Perhaps it is that they recognise the radical censoriousness of their own institutions, calling as they have been for no platforming, speech codes, trigger warnings, cancel culture and the apartheid logic of critical race theory. For modern-day unions, contentious ideas are something to be frowned upon, condemned or dismissed, rather than engaged in and debated. Paty, unkown by many in the UK until his death, was murdered for raising polarising issues in a moral and civic education class, designed to raise – and more importantly debate – contentious ideas.

As a matter of fact, Paty offered his own trigger warning to students, allowing those who might have felt uncomfortable discussing the Charlie Hebdo cartoons to leave the class. But it was not enough to save him from the extreme logic of cancel culture. Only a few commentators in the UK have been grotesque enough to suggest that Paty “brought it on himself”, but in the aftermath of this attack there has been an increasing sense that we shouldn’t raise difficult issues for fear of retribution. Nothing as extreme as Paty, of course, but the message is: Stay safe. Don’t cause trouble, Keep your head down. Shut your mouth.

To their credit, teaching programmes in France have been encouraging a more confrontational engagement with young students for years as a way of challenging Western nihilism or Islamist fundamentalism in the aftermath of a spate of Islamist terror attacks. Empowering students to think critically, engage with difficult arguments such as debating blasphemy, criticising religion, etc., has been intended to reinforce the cultural supremacy of democratic ideals and the French conceptualisation of intellectual free expression and moral agency.

On the day of Paty’s death, President Macron denounced this attack on a teacher as a symbolic act. The terrorist, he said, “wanted to attack the values of the Republic; the Enlightenment; the possibility to make our children free citizens no matter where they come from, no matter what they believe in or don’t believe in, no matter what their religion… This is an existential fight”.

In the light of that battle, the so-called radical left in the UK have shame-facedly turned their backs on the fight for liberty, and free expression. Teachers unions have looked the other way when a murderous attack was launched against a fellow teacher; which is also an attack against intellectual engagement, confrontational ideas, and the right to engage with challenging opinions. The very stuff of education. Here in the UK, a union is more likely to condemn someone for expressing “illegitimate” beliefs, caling them a fascist, a denier, an illiterate, or merely someone who should be silenced. The logic is there for all to see.

This is a low point for them. Their internationalism rings hollow, and they have forgotten the meaning of liberty and the importance of developing critical judgement.

We need a radical restatement of educational values, political solidarities and to reclaim a space – for young and old – for open, critical, challenging opinions.