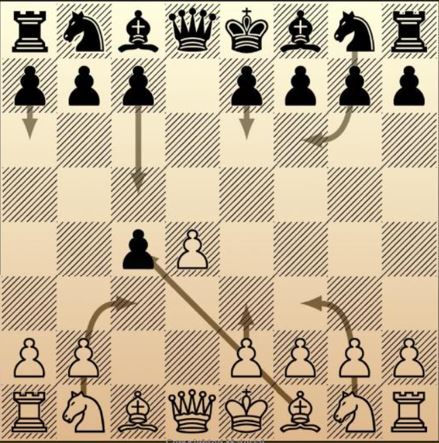 In the Netflix Series “The Queen’s Gambit” (based on the 1983 novel by Walter Tevis), an orphan girl, Beth, learns to play chess in the boiler room of the orphanage in which she grows up. The janitor, initially reluctantly, then with fervour teaches her the thinking behind the game of chess, but also like a father, teaches her the culture of chess.

Through the series we see Beth, now adopted by a disgruntled couple, develop her mastery of chess; mastery that we have seen early glimpses of when she cleans up in a simultaneous competition at the local chess club, against a series of opponents that are far older and more experienced. And, if it matters, all men.

I will not reveal too much of the series but I will consider a couple of things that have resonated with me as I watched it. Of course, all of the episodes are well structured and the chess playing is original and when you get a glimpse of the chessboard the moves are impressive and, if you know how to play chess, sometimes thrilling.

In the series we see Beth, the girl and the woman being completely underestimated by the other chess players. The series reveals Beth’s -and every other chess player worth their salt’s – secret. Beth does not play move by move, but in patterns. She computes speculatively. 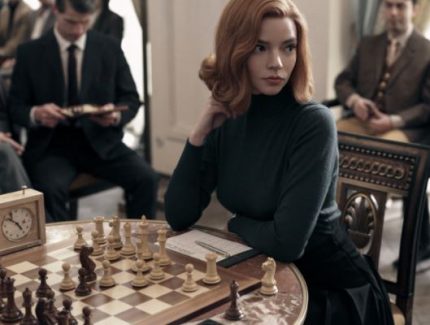 Her genius lies in this Aristotelian universe where you can hold a multitude of conflicting patterns of choices and future moves in your mind at the same time without going mad. Almost. We see that Beth is at times at risk of going crazy, or rather her craziness is focused on the creativity of computation, of generating new patterns. Chess players, like mathematicians or physicists, are always looking out for what they call “elegant solutions”, i.e. patterns of computation that take fewer steps for the same results, or patterns of moves that compel your opponent to make a particular move; something that maybe five or six moves down the line, will force him or her to a submission.

Chess players, mathematicians, physicists, scientists, are not automatons; mechanical, calculating machines devoid of any creativity. But one of the reasons why non-chess players, non-mathematicians might think so is that they are often blind to what they see. Chess players are much more alert to creative possibilities. When computing, they do not just go through the motions but they construct speculative computational universes: a long interlinked series of “what if” scenarios, move after move. “Regular” people can see maybe 3-4 moves in the future, computation geeks can see in a depth that far exceeds that, along with multitude parallel universes of “what if” moves. With that understanding, when Beth plays chess in her head she shows us that chess computation in its pattern generation, is beautiful. She shows us that chess computation is inherently creative. 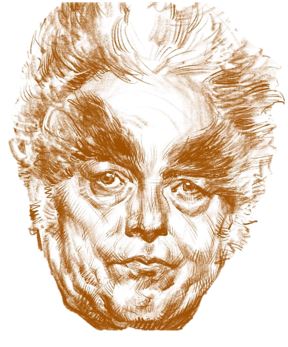 One other set of fictional geeks that flirt with insanity in their speculative computation, ones that are closer to chess players, are Mentats from Frank Herbert’s 1965 science fiction work “Dune” (and subsequent Dune franchised works like Brian Herbert’s “Mentats of Dune”). They are human computers in a world where computation by machines has been banned so that we avoid the pitfalls of artificial intelligence.

The Mentats in Dune are chess players, but the world in which they compute is real and extends beyond the chessboard’s 64 squares. In their world, they compute speculatively about what could and might happen and as a result they advise their ruler on appropriate courses of action. As such, they are not passive but actively plot scenarios into the future and “test” the environment’s and the opponent’s responses.

Back to the Queen’s Gambit then, the moments that I really enjoyed in are the ones where Beth computes a series of patterns and then suddenly gets “it”; she sees the path to take and takes it. This is beyond a mere computational approach, but she also gets the same kind of rush that you get when confronted by an elegant, unforgivingly beautiful solution. My enjoyment of the programme was enhanced by the fact that I recognised her revelation, similar to the thrill that I get in my own professional life as an architectural computational designer.

Many people have a caricatured notion that architects spend their time painting or sketching or doodling on napkins, but what most good architects do is compute patterns. They put together shapes programmatically, they enclose spaces, and in their heads (or rather, in the coordinated system of head, hands and an external computing platform), they compute speculatively what the future might be. In this they are always moderating, assessing, and judging between an infinite number of patterns, shape recognition and a discriminatory recall of established building types and architecture patterns. Here they construct “new” patterns created out of lines, shapes and building components so that some human need for shelter is taken care off. 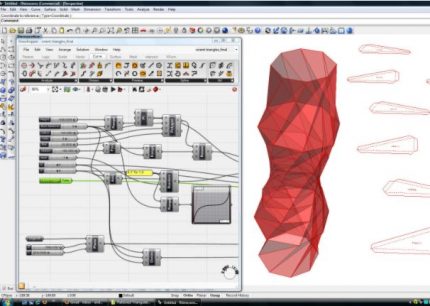 However, there are some architects that like to interpret this process as a romantically creative endeavour rather than a generative computation process. I will leave them in their naivete, and I will continue to regard computational design as the moment when – through the infinite shifting patterns available to us – one stumbles upon something incredibly elegant and truly beautiful.

This is the moment that classically trained architects fail to understand or refuse to acknowledge: that computation is no different than putting together new spatial patterns or inferring result from types. In fact, theory suggests that typological methods, syntactical methods, and computational methods are just three facets of the same prism. All this takes place inside an architect’s mind when sketching a detail.

Like playing chess, architects attempt different scenarios, speculating about how the different layers of these building might come together. Like Beth, we sift through pattern generations, a line here, a shape there, a building component articulating with another one, in the effort to make our building detail “work” in given contexts. Of course, the detail works best when you abandon adversarial strategies and play with the opponent not against him.

Next time you meet someone that you think has god-like capabilities in computational endeavours, ask them how many patterns they see and how they make a choice, take an action, or plot a future. Ask them how many hours did they spend, like Beth, lying on their beds dreaming about desirable computations.

Then ask them, “Do you want to play another game?” and accept these moments when they are going crazy, lost within pattern generation.