Home » Articles » The Coming of Neo-Feudalism, by Joel Kotkin

The Coming of Neo-Feudalism, by Joel Kotkin 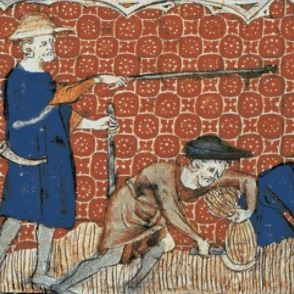 Joel Kotkin who writes out of California has built a reputation as an iconoclast and a challenger to much of the conventional thinking around Urban issues. At the heart of his concerns is the tendency of present policies whether economic, social, or urban to restrict and constrain the socially upward mobility of the middle classes.

Using modern day California as a template he sees urban planners designing out the middle class family from cities with densification policies (the book’s subtitle is “A warning to the Global Middle class”), and he demonstrates the demise of secure employment in manufacturing that historically gave substance to the American dream in the 50s and 60s. He has tracked the rise of a new elite and the new era that people find themselves in.

In this book he has attempted to broaden his argument and see how world-wide trends are conspiring in one direction. He describes this as the coming of Neo Feudalism and he hopes that by clearly identifying what is happening we can take appropriate action to challenge and reverse these trends. Indeed, this is a bold argument taking in historical analogy, the social control exercised by a new elite, the rise of China, and the urban environment. 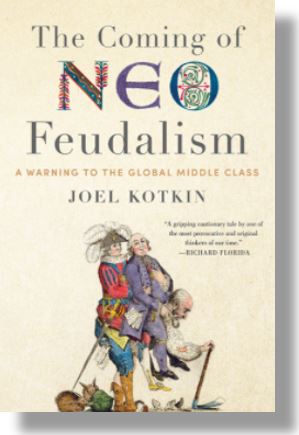 Kotkin doesn’t pull any punches in cataloguing our present condition. The book is not for the faint hearted and you could emerge from reading it feeling somewhat downbeat as you are hit with just about every kind of worrisome prophecy. Given our present Covid world experience you may feel Kotkin’ s hard hitting approach is needed, but let’s not forget that this book was written before the pandemic struck and therefore the trends were well established pre-Coronavirus. Many of the issues that Kotkin highlights have simply deepened and speeded up under our current public health emergency.

There is a broad historical sweep to the book with Kotkin claiming we are returning to a more restrictive feudal society as opposed to the broadly individualistic and materially liberating era of capitalism. Lorded over by a new clerisy (which is shorthand for the tech sector, academia, and the public sector) the working class and the middle classes are seeing their employment and career opportunities becoming more and more restricted. Trying to draw too many analogies with life in Medieval Europe aside, the point is well made.

Why are issues of freedom of speech, freedom of association and even freedom of thought under the spotlight today? It can only point to a fundamental reversion to pre-capitalist norms when the Catholic Church, for example, was able to police speech and thoughts and so maintain social cohesion. The new clerisy that has arisen has had a long gestation but has arisen alongside the expansion of credentialism that people put such faith in. A change in social values since the counter-cultural revolution of the 1960s has also provided a new ethos for the clerisy to follow. As Kotkin describes it “a new priesthood of power based on scientific expertise seeks to replace the bourgeois values of self-determination, family, community and nation with ‘progressive’ ideas about globalisation, environmental sustainability, redefined gender roles and the authority of experts.”

Kotkin is on slightly weaker ground when he looks at the global picture, i.e. China. Whereas the clerisy in the western world actively looks at ways to restrict economic activity and control what people think through universities, cultural institutions, and the non-profit sector, clearly the issue for the governing elite in China is rather different. They might notionally look the same – hence Kotkin’s use of metaphor and historical analogy throughout – but there are fundamental differences. While China’s hukou system of residential permits keeps millions of migrant workers in an oppressed position, we still have legal freedom of movement in the UK (albeit currently revoked under Covid rules). While the West has the stealthy growth of CCTV cameras or Facebook and Twitter storing masses of personal data, China is rapidly advancing towards an all-pervasive surveillance society. Yet China’s is not a clerisy of secular intellectuals guiding society (a definition, we learn, that was first coined by Samuel Coleridge Taylor) – but a massive state-sponsored, centrally-coordinated, social control machine. 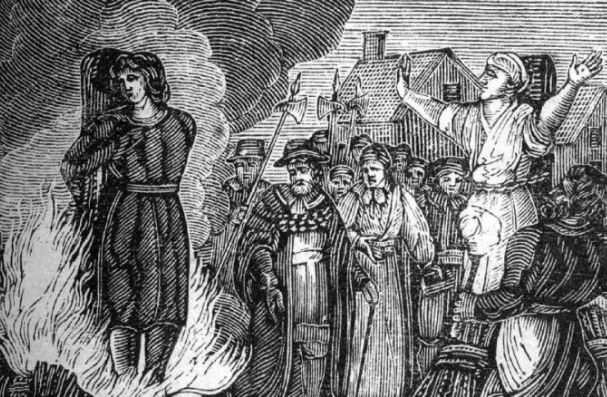 Kotkin returns to his home territory in the new geography of feudalism. For Kotkin urban planners are very much at the heart of the clerisy. They favour densification in the urban centres based around public transport and green lifestyles. Indeed, we have seen how deeply ingrained this thinking is during our recent Covid emergency and subsequent economic depression. Based on the theory of the 15-minute city and the creation of a city of neighbourhoods, local authorities in London and Paris have used the Covid emergency to close down roads and to greatly increase the space dedicated to cycling. As Kotkin points out in reference to Medieval feudal society 80% of Europe’s population never went more than 20 miles from their place of birth so we may be getting closer to the feudal world than we imagine.

For Kotkin “the new urban paradigm elevates efficiency and central control above privacy, class diversity and broad-based property ownership.” He has little time for concepts such as the Smart City where algorithms would control our way of life and he warns that the digital city is “perfectly suited to the neo-feudal order.” An argument could be made against Kotkin on so called gentrification. Where Kotkin sees a plot to lure the business elite and expel the working classes from the city others might see development of run-down inner cities bringing benefits to the wider society including the aspiring working class. It is a contested area and open to interpretation.

Kotkin draws out the fundamental tension at the heart of modern society. People still strive for improvement, upward mobility, and material progress but the ruling ideas in western society negate and restrict this striving. Rather than a deterministic trend towards a neo-feudal future we are witnessing a struggle between competing outlooks. The closure of roads in London has led to local protests as people realise they are being penalised for using public roads to go about their day to day business. Kotkin himself recognises in votes such as the Brexit vote and the vote for Trump a visceral rejection of technocratic rule but he looks elsewhere for solutions.

Returning to his feudal theme “the key to resisting neo-feudalism today lies in the same kind of people who bought the first version to an end, a numerous and politically vigorous class of town dwellers.” These need to be people who “own some property and often their own business and who build communities around the needs of their families.” Setting aside the conjuring up of old ghosts; Mrs Thatcher and the property-owning democracy of the 1980s comes to mind, Kotkin is right to highlight a dilemma. We need a challenge to dead-end identity politics (divide and rule) to be replaced with an argument for a politics that reflects the needs and desires of aspiring families. Sadly, I suspect many would reject Kotkin’ s solutions even if they agreed with some of the analysis and would tend to look to the State for redistributive action and more regulation rather than a freeing up of growth and individual opportunity.

Kotkin’ s book is perhaps a little over-ambitious and would have benefitted from a greater focus on the Western world where the issues are a bit clearer. Nevertheless, I have a great deal of sympathy for his unapologetic argument that places the upward mobility of the middle class at the heart of his ideas. It is a book that defends democracy, progress and challenges many reactionary orthodoxies and for that it is to be applauded.

There are times when forces conspire against people: to restrict their energy and this is one of those times. Fortunately, such times are countered by a book like this that promotes the drive for self-reliance, critical engagement, self-improvement, and material advance.

Buy this book on Amazon.