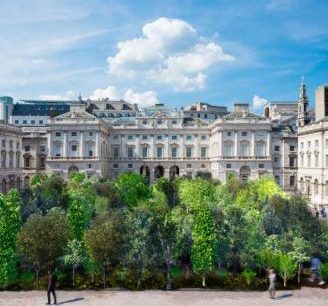 The third London Design Biennale (LDB) runs from 1st – 27th June, hosted at the magnificently imposing Somerset House, on the banks of the River Thames.

The LDB, with its global reach and international scope, is a unique opportunity for the invited designers to showcase their thinking, in relation to the design process, materials, technical innovations and new techniques, as applied to building and making. Events like LDB are crucial for the wider design community to engage with the best thinking of internationally-renowned practitioners. It is also a chance to engage an international audience of creatives, business, and the public in how the design community is responding to new challenges. Such an event might begin to answer the question: how does design meet the needs and desires of the public in everyday life?

Well, that paragraph describes how things might be if I was in charge.

Instead, in reality, the LDB is a forum to give a visual expression to the elite ideology of environmental catastrophe. The central mission of LDB, according to this year’s artistic director, ES Devlin, is to “advance the United Nations Sustainability Plan”. Indeed, Devlin’s signature exhibit, “The Forest for Change” is an installation of 400 trees planted in the courtyard of Somerset House.

So, before visitors can get to design matters at a design event, they must first wade through The Forest, and once they reach a clearing, will be educated about the United Nations global goals for sustainable development, a plan to tackle the climate crisis. It is a project that seeks to promote the agenda of one of the biggest transnational organisations in the world; rather than simply allowing design to be transformational and a locus for agreement and disagreement. There is, after all, only one “correct” interpretation of this installation isn’t there? In the same way that spectators who boo footballers for taking the knee are condemned as “ignorant”, so anyone criticising this juvenile art may expect to be secretly vilified.

But designers who think their role is to “educate” the public, about anything, are sorely mistaken. The relationship between design and the public, to be truly purposeful, transformative, and educational, is a two-way street. Designers must meet the public – as active participants. Anything else infantilises the public and sets the designer up as a social engineer, or simply a pompous prick.

In the course of designing The Forest, Devlin has collaborated with Project Everyone, a not-for-profit communications agency devised by the British schmaltz film director, Richard Curtis.

Describing the point of her installation, the LDB’s art director, artist and set designer, recalled, “When I was first shown around Somerset House many years ago, I discovered that the enlightenment principles on which the building was conceived specifically forbade the introduction of trees into the courtyard”, and so, “the first thing we wanted to do when considering this year’s Biennale was to counter this attitude of human dominance over nature by allowing a forest to overtake the entire courtyard.”

Unfortunately, such misanthropic petulance is all too common among elitists in Design-Land. But narcissistic outbursts are all too common from prestigious international design creatives these days. Design is often used as a means to insult the audience – not just to insult their intelligence, but to assist them to rise above their presumed ignorant existence. They have positioned themselves as the visual wing of the political elite: those who can see further and more wisely than the rest of us. It is an outlook that brooks no dissent and, as it happens, has nothing to do with design as a vital social activity.

The Forest is crass virtue-signalling. It is neither radical nor innovative – it has been done before. But worse, it is misanthropic in its sneering contempt for humanity. Tragically, The Forest is both the first thing visitors will interact with as they enter Somerset House, and it is the central editorial message of the LDB for the watching world online.

The installation also skirts far too close to anti-design vandalism. It diminishes and defames a spectacular and awe-inspiring piece of Neoclassical architecture in favour of a superficial performance of environmental self-aggrandisement. You might have thought that someone, somewhere would have noticed this glaring contradiction; an international design and architectural event shrouding a canonical piece of world architecture? The contempt for the history of design and architecture is apparent, but ignored. There seems not to be the same kind of criticism that was levelled at I.M. Pei’s pyramid at the Louvre, for example.

So, it begs the question, what is the point of the London Design Biennale?

Thankfully, there are those who have remained true to the craft of design, so it is not all bad news. The installation, “Reinventing Texture” by the Architect Toshiki Hirano, is fine example in its design essentialism. In his contribution he uses traditional techniques, including Washi paper and Japanese papier mache, alongside soundscapes and modern innovations like 3D scanning and digital fabrication. The result is an 8-meter wall relief of urban colours, textures, and patterns. Toshiki’s aim is “…an attempt to capture a texture of the city…’’.

His unique approach to thinking about the city, and seeing it anew, and his use of traditional and innovative techniques speaks to the craft of design. He shows that when designers are left to design, they can make us look again at the familiar, find new expressions and ways of seeing. Reinventing Texture is curated by Clare Farrow Studio and partnered by MA Interior Design at the Royal College of Art and MSCTY Studio.

This is precisely what LDB should be all about, more design activity and less of the design “activism”.

In design terms, the LDB will amount to nothing if it is not a place for designers to dig deep and explore their craft. If it can be a space for design ideas, big ideas, experimentation and the exploration of innovative technologies and materials, then it will play an important role in design culture.

If design is to play its historic, purposeful role in the creation of a better life for all, it must regain its spirit of independence as a discipline and activity shorn of political and ideological intrusion. Thankfully, there are still those that are doing just that, despite the worst intensions of the elitists running the show.

The Forest for Change is one stage set I look forward to being struck. It is a damning analogy for today’s anti-design, design elites. Thanks to them it is getting harder to see the wood for the trees.

Alex Cameron is a writer and designer based in Madrid. Visit his blog here.