Home » Articles » Book Bites: “How To Avoid A Climate Disaster” by Bill Gates

Book Bites: “How To Avoid A Climate Disaster” by Bill Gates 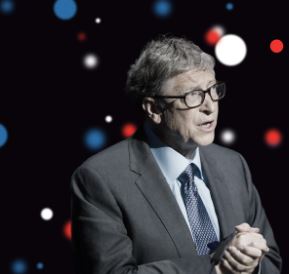 That Bill Gates should concern himself so earnestly with the problem of climate change and its supposed calamitous nature may seem contradictory to many people. There are no shortages of mega rich celebrities, from the XR-supporting Emma Thompson to the bare-footed Prince Harry, who are ever willing to be flown by private jet to moralize about climate change. And Bill Gates is one of a large number of those whose lifestyles seem at variance with their obsessions.

While he famously sports a $10 digital watch, Gates’ lifestyle has other elements of frugality as he reportedly flew everywhere economy class until 1977. But there is no getting away for the fact that that when it comes to lifestyles, carbon footprints and planet impact, Bill Gates is a heavy hitter.

The Gates’ family home Xanadu 2.0 is a large mansion overlooking Lake Washington. It has seven bedrooms, twenty bathrooms and a 20-room living area as well as garaging for 30 cars. The five-acre estate features a stream with salmon and trout and a beach with sand imported from the Caribbean.

“I wanted craftmanship but nothing ostentatious” said Gates.

He and Melinda also own two ranches in Florida and Wyoming, plus other homes in California, one with its own racetrack.

Gates is said to plan out his days in five minute blocks and thus justifies his fleet of four jet aircraft, a Cessna seaplane and a collection of helicopters, as time saving devices. He recently joined a £3bn bidding war to buy the world’s largest private jet services company.

According to a study by academics at Lund University, Gates is one of the world’s biggest “super-emitters” due to his regular private jet travel. He does though, admit that owning and flying in private jets is his “guilty pleasure”.

The Bill and Melinda Gates Foundation is the world’s largest philanthropic entity giving away $5 billion a year. As they divorce, their personal wealth is valued at $146 billion; staggering sums that could do immense good in the world… or as some fear, immense harm.

It is worth remembering that Bill made his initial fortune with Microsoft software. But the software was sold on the back of the unexpected runaway success of the PC. The PC was manufactured under an open license and the specification to manufacture the hardware was available to anyone. The software platform thus became ubiquitous and cheap. The software though, was a different matter. Bill had the exclusive rights to supply it and closely controlled it. Bill Gates’ success was not due to the excellence of DOS but due to an insatiable demand by business to run Visicalc. Bill was the Gates-keeper.

Interviewed on the subject of vaccines and asked if the formulations of vaccines should be open source and not subject to royalties and control Gates calmly answered, “No”.

I think we should bear this in mind when we consider his enthusiasm for technical solutions to climate matters. Bill is no philanthropist. 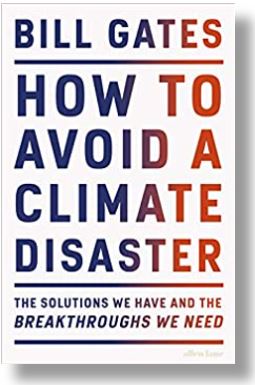 I’m going to have to stick a pin in the major theme of the book. There is an automatic assumption that there is absolute consensus on the fact that the climate is changing for the worse, that the majority of it is human caused, that CO2 is the singular control knob on climate, and that all effects of a changing climate are automatically disastrous. When the world has decided that Man’s effect on the climate can be reduced to one variable, CO2; it would be pointless to argue out these points here.

In fairness, in this book, Bill is a realist. He points out the link between fossil fuel energy and prosperity. He examines the energy density pointing out that fossil fuels are far and away more efficient in terms of land use than even nuclear power, and that vast tracts of land will be employed for little energy if wind and solar are used. Bio fuels are even worse.

Though I have a degree in chemistry, I don’t count myself a scientist. But I think I know enough to say that if Gates has availed himself of scientific advice (as he states several times is the chief advantage of his wealth) he has either not understood, or only heard what he wanted to. Or his interpretation is disingenuous. Much that he writes is simplistic – sometimes juvenile – not in itself a problem for a book trying to explain complex science for a lay audience, but it is also contradictory or wrong in parts. Now that is a problem.

He explains Greenhouse Gas (GHG) theory in terms of a greenhouse, then elaborates explaining that this is not quite how it works (greenhouses get hot as a convective effect, the planet as a consequence or radiative effects). But then he backtracks and likens the warming to that of a car with an uncovered windshield heating in the hot sun. Climate change is like a tap dripping into a bath – inevitably, at some point, it will overflow. Geddit?

He explains and quantifies the 51 billion tonnes of excess “carbon” in the atmosphere. He correctly clarifies that all references to “carbon” are shorthand for a group of GHGs (CO2, methane, etc) and are not references to the element carbon. But he then states that 10bn tonnes of emissions are elemental carbon implying that this also contributes to warming when in fact, as 911 confirmed, it has a large cooling effect. Reducing carbon-equivalents is not the same as reducing carbon.

He spends some time explaining how the world will be drier and crops will fail despite the very real fact that increasing CO2 has had a greening effect and that the use of fossil fuels (in social and industry development) has resulted in record crop yields. The very real famines of my youth which inspired Live Aid are (technically) behind us… the major cause of famines are war and political upheaval, regardless of weather.

But later in the book he explains that the world will be warmer and wetter. He runs out the old trope about mosquitos and malaria. Not only is this wrong, mosquitos are quite at home in the cold, but until the widespread use of fossil fuel derived insecticides malaria was a scourge for west. If the US suffered today the 1920’s rates for deaths by malaria there would be 18,000 malaria deaths per year and many more living with the dreadful symptoms.

He contrasts deaths from coal, oil, gas, biomass and nuclear but leaves out deaths from solar and wind which are not zero, especially when you factor in the human cost of mining. He shows that in terms of material costs of concrete, steel and glass (all themselves with large carbon footprints) nuclear, coal and natural gas have surprisingly small footprints compared to the massive carbon footprints of wind. But he states that when it comes to wind and solar we must “deploy, deploy, deploy”.

So. I found the book to be frustrating. Titled: “How to Avoid a Climate Disaster”, the book is a litany of the problems to be overcome with technical solutions. Bill explains each problem in turn rating the difficulty of overcoming them as a Green Premium (the increased cost of replacing each problematic process or practice with the “green” alternative). He offers little by way of explanation as to why people might choose the more expensive green alternative, implying that they might have to be imposed.

Later he lists 20 technologies that largely do not currently exist today as key to solving the problems of becoming carbon zero. His solution to the non-existence of these technologies (for example zero-carbon steel and zero-carbon cement) is that government should quintuple clean energy and climate related R&D investment.
“Direct public investment in research and development is one of the most important things that we can do to avert climate change” he writes “but governments aren’t doing enough of it.”

Ultimately this reflects the key theme in Gates’ book which seem to drive all current elites’ obsession with climate. The first is the drive to create new areas for consumption and profit. Ironically the “left” interprets anti-fossil fuel rhetoric as anti-capitalism whereas it is merely the age-old battle between new capitalists and older forms of capital. Gates’ book is the manifesto for the new capitalism. But it is insidious because it seeks to above all else to socialise the risk whilst privatising the profit.

Bill Gates’ “How to Avoid a Climate Disaster” is available here