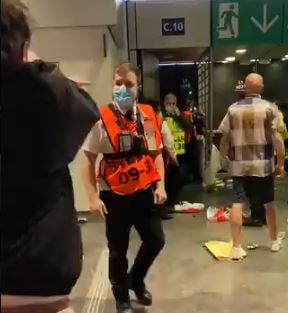 I was at the England v Italy final at Wembley last night. Since getting home this afternoon I’ve been told by a number of people that “Fans had broken into the stadium”.

This is not true.

A complex electronic ticketing and Covid testing system had been put into place which broke down on the day, and the ensuing crush at the turnstiles was alleviated by stewards opening the doors to the stadium.

As you can see from the picture taken halfway up the steps to the stadium, there were no gates. Instead, over WIFI or Bluetooth, tickets were being activated as people approached the stadium. Unfortunately, this hack was only partially successful. A large percentage of tickets were not getting activated. Their owners were blocking the turnstiles. Fans were arriving faster than the number entering the stadium, and a backlog of fans with valid tickets were adding to the mayhem by standing around, waving their mobiles in the air trying to get a signal that would activate their tickets. 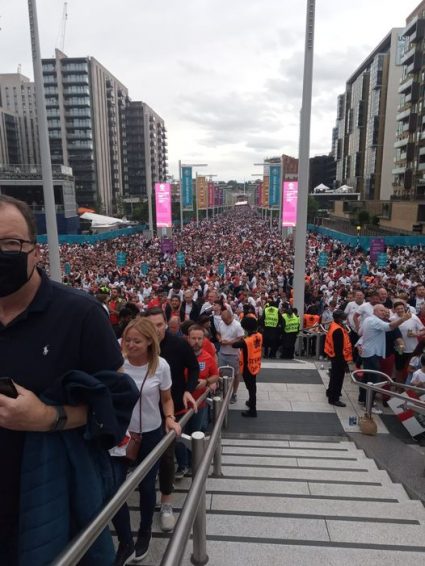 The tickets were supposed to be delivered to an app on our phones, but in an inactivated state. At gateways on Wembley Way the photo IDs of the holder were supposed to be visually inspected against IDs supplied at the time of purchase, to prevent ticket touting. The tickets would then be digitally activated so that the QR-code page appeared, and you could get into the stadium.

At some point the stewards opened the doors to relieve the crowding. In the circumstances this was the safest action to take. Better a lucky few who had got in without paying, than dead bodies on the pavement.

This is not the first time Wembley has got technology wrong. When simple electronic tickets were first introduced, they did not work either and doors were opened so tickets could be inspected manually. But this was at a couple of poorly attended friendlies so did not attract attention, or a mass entry of un-ticketed fans.

The semi-final also had its problems with tech. We were supposed to show proof of being Covid safe, either by certificate or using the NHS-app. This time there were gates, but the NHS-app failed, and we were waved though. At the final, the authorities had even given up on this. There were no gates and no Covid checks.

As a football fan you get accustomed to being calld homophobic, racist, etc. And once again we are the target of false reporting. I realise that against the power of a prejudiced mob, lone voices like mine are unlikely to be heard, but there are bigger issues at stake here. We were teetering on the edge of a disaster. What actually happened is that we narrowly averted an electronically-engineered Hillsborough!