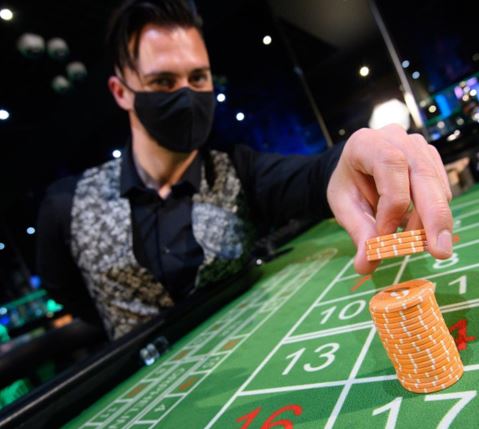 Poker players are used to having to show their cards. But now, to get into the biggest poker tournament in the world, they will have to reveal their Covid vaccination status too

On 27 August, the World Series of Poker announced that participation in the 2021 World Series will require proof of full vaccination against COVID-19. This was the outcome following months of deliberations by the event organisers, and weeks of speculation and discussion within the poker community. The message has been greeted with equal amounts of joy and dismay. Some seasoned poker players like Chris Moneymaker and Andy Bloch welcomed the move. For others, including Kristen Bicknell and Alex Foxen, it confirmed their decision not to play.

Foxen (a WSOP circuit event winner in 2012) called it “medical apartheid” and an “assault on logic and liberty”. Bicknell, a three-time WSOP tournament winner wrote: “I am boycotting this utterly illogical tyranny. ‘I’m tired of playing along with rules and mandates that don’t make sense’. 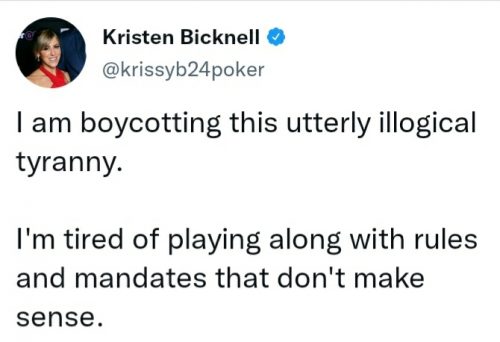 As news of the rule spread on social media, others on Twitter stated their intention to boycott the event, including the millionaire businessman, film producer and actor, Bill Perkins. “For some people’ he said ‘(vaccination) it’s not the way. I respect that without intruding into their lives.” And Alexandru Papazian, who won a WSOP Bracelet in 2017, also said that he would not be playing. “Poker should be inclusive for everyone. We do not bring religion, politics or medical choices to the table.” 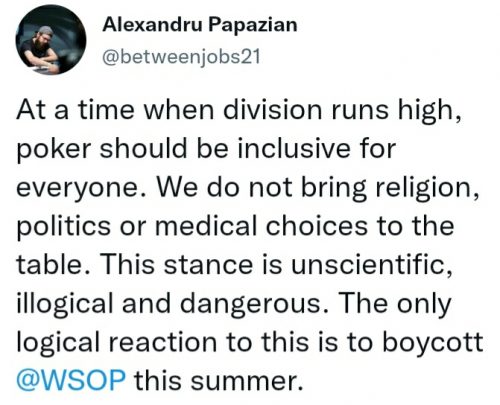 This last point is really important. One of the good things about poker tournaments is their democratic and egalitarian nature. Unlike a game such as football (when the chances of finding yourself kicking a ball with the likes of Messi and Ronaldo are almost zero) in poker you can enter a tournament and find yourself playing with one of the most famous poker players in the world. All you need is the money to enter the tournament. The random drawing of tables and seats means you could be sitting next to the very best. Or, if you are really lucky, the very worst!

The reception to the announcement from the WSOP is best described as mixed. One player lamented the exclusion of unvaccinated players from the game, saying it would affect his chances in the tournament: “‘I was hoping to play against people who make terrible decisions,” he said.

In 2006, I was lucky enough to play in the WSOP Main Event. It’s truly a great tournament. Like so much else, it was cancelled last year so it is great that it is going ahead this year. The organisers are doing everything that they can to try and re-build what we have lost but doing so in this discriminatory way is a retrograde step.

Vaccine passports are not the way to build back better. We need to bring back enjoyment as well as normality. With all tournament staff, media, employees, vendors and spectators also needing to be fully vaccinated, what does that mean for workers’ rights? Those players refusing to take the vaccine can simply stay away, those employees making a similar decision, (for a variety of reasons) may lose their jobs.

These are difficult times for those of us who favour the Covid-19 vaccination but do not want to see it made a condition of work, nor a way of excluding people from certain activities, as participants, workers or spectators! There are important principles at stake that need defending. Freedom of choice is just one that should not be ignored. Bureaucratic, unwieldy, Manichean policies and practices risk dividing society at a time when we need to start coming back together. We shouldn’t start by curtailing access to the fun things in life.

It is good that in a few weeks we will once again hear those famous words that signal the start to the world’s most prestigious poker tournament: “Shuffle up and deal”. My worry is that the introduction of vaccine passports for the WSOP will set a bad precedent for poker and casinos right across the gambling industry. Some say that playing Slots Online is a great option in such situations. We might be coming to the end of an unprecedented situation and a global pandemic but setting up divisive procedures is not going to help us come out of it.

Jon Bryan is a poker player and gambling writer.
His blog about his WSOP adventure is here.
He tweets at JonBryanPoker